For Jeepney Drivers and Truckers in the Philippines, a Long, Hard Slog

Since the Arroyo regime expanded the value-added tax on oil and since the implementation of the oil-deregulation law, most jeepney drivers have to work long hours, often up to 14 hours a day. If they don’t, whatever money they earn for the day will only further enrich the oil companies — and they go home penniless. Think about this the next time you are tempted to curse jeepney drivers for being uncouth, discourteous and undisciplined, as the government is wont to depict them.

MANILA – Public-transport drivers, especially jeepney drivers, are often portrayed as uncouth, undisciplined and discourteous on the road. Government agencies regulating public transport believe they deserve the huge fines being slapped on them if, for example, they wear slippers and undershirts while driving. Many commuters have complained of drivers taking too long a time to fill their jeepney with passengers that seem to get fewer each day.

Each time they hold protest actions, such as a strike during which they do not ply their routes, jeepney drivers are viewed as inconsiderate at best, saboteurs at worst. 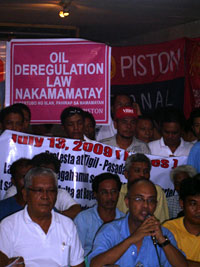 According to members of Task Force July 13, the group of transport organizations calling for today’s strike, they understand the riding public’s sentiment. But they are urging private motorists to boycott the oil companies on the day of the transport strike, and the riding public to understand, even go out and support the drivers and operators’ struggle, “because the fight against the unhampered greed of the oil cartel is everybody’s business.”

Since Arroyo expanded the value-added tax on oil and since the implementation of the oil-deregulation law, most jeepney drivers have to work long hours to earn something for themselves. If a driver works for only eight hours a day, his earnings would only cover gas for his jeepney for that day and, in effect, only enrich the oil companies, said longtime jeepney driver Carlito Mendoza. Jeepney drivers today average 13 to 14 hours on the road per working day, others even up to 18 hours.

Usually, it is the younger drivers sharing the jeep with other drivers who try to stretch their working hours to 18. Bien Michael Obispo, 25, drives a jeepney three days a week; his uncle in-law drives it the other three days. Though young, Obispo complained there are mornings when he could not get up anymore. His uncle, Carlito Mendoza, a driver for 35 years, told Bulatlat the average work hours of jeepney drivers in their route was 14 hours. “You will not earn anything if you work for just eight hours,” he said.

“You will not get rich from driving a jeepney,” said Domingo Tano, a jeepney driver for 16 years now.

In fact, as years go by, these drivers’ job conditions have deteriorated rather than improved. Even relatively well-to-do drivers and operators such as Romeo Villados, 56, are not immune from the hardship. After 36 years working as a driver, he said, he has to work for 13 hours a day from 5 a.m. to 6:30 p.m., just to earn around P200 ($4.14). He said from 2001 to 2003, he could earn P700 ($12.91 at 2003 exchange rates) if he worked for 13 hours or even less. Because of the oil-price increases and the consequent stiff competition among drivers, his income has been reduced significantly. So he decided to sell one of his jeepneys.

For Tano, a whole day’s work means six to eight roundtrips. They have drivers who start working at 3 a.m. and park at 3 to 5 p.m., for a total of about eight roundtrips in 12 to 14 hours.

“We’re joining the drivers’ protest actions and strike so our protests would be heard by the government,” Tano said.