Five months later, however, the decision was reversed. Raymundo was told that the tenured faculty unanimously decided not to recommend her for tenure.

“When I asked her about the grounds, I was told that the Chair was bound by the tenured faculty’s wish that she only be allowed to merely inform me of their decision,” Raymundo stated in a letter to Cao.

“I was not officially asked [to comment] on the minority’s allegations,” Raymundo said in a recent forum. “Given that the rules prohibit anything but academic grounds for the granting of tenure, what are the undisclosed bases of all these procedural complications?” she asked.

“Tenure is not only a matter of vote, numbers or accepted departmental practices. It is also a matter in which fairness and transparency would be ensured and academic freedom vigorously protected,” Raymundo said.

In its statement, the AUPAEU criticized the lack of transparency in Raymundo’s case. “The union has indeed faced several similar cases from various departments and colleges but, in great contrast to the Department of Sociology, all of the offices concerned have been direct and forthright regarding the bases of their decisions. None of the departments or units concerned questioned the right of the individuals concerned to be informed of the reasons which led to the denial of their tenure. Their official communications contained their explanations in black and white with the proper documentation and proofs. None of them asserted that such criteria or bases were a private matter to be kept a secret from the rest of the University community and the individual concerned. Such an attitude would lead to arbitrariness, the subversion of due process and the decline of academic excellence. It would effectively deprive the concerned individual her legal right to appeal what may have been an unjust decision.”

The union asserted that the university and the Department of Sociology are duty-bound to present in clear terms the bases that were used in deciding against the granting of tenure to Raymundo. “Whatever these criteria may be, academic or non-academic, Prof. Raymundo has the right to be informed of these so that she may be able to respond or act accordingly.”

Taguiwalo cited the University Council December 2008 Additional Guidelines on the Process of the Grant of Tenure, which states that there should be a written notification of the evaluation criteria and procedure for tenure and that the chair or dean is responsible for issuing the official written notification of the non-award of tenure and the reasons for the decision.

The allegations hurled by the department minority against Raymundo have something to do with Karen Empeño and Sherlyn Cadapan, Contend disclosed in a statement. UP students Empeño and Cadapan were abducted by military men in June 2006 in Hagonoy, Bulacan. In a press conference, Raymundo was among those who called for the release of the two UP students. 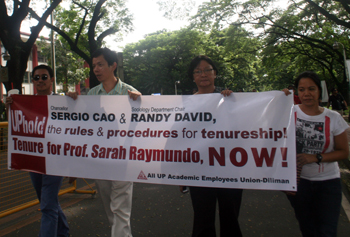 In fact, Raymundo was invited several times by the department to explain her involvement in the campaign for Empeno and Cadapan.

According to Contend, Aquino, then chair of the Sociology Departament, asked Raymundo if she was the one who recruited Empeño into an activist organization. ”Is this an innocent line of questioning that merely aims to gather data? Are these questions usually asked to all members of the faculty?” Contend asked.

“By singling out this faculty member, maliciously accusing her of politically loaded intentions, denying her tenure and subsequently closing ranks to supposedly defend the integrity of the department, the tenured faculty seems to be saying that sociology has no room for the likes of us who believe that the point sf Sociology is not to interpret the world, but to change it,” Prof. Arnold Alamon, Raymundo’s colleague at the department, said in a statement. (Bulatlat.com)