Torres and his co-workers started their march in Crossing, Calamba. From there, they walked toward Alabang, taking the route of Biñan to San Pedro.

Torres said hundreds of workers who participated in Lakbayan are victims of illegal dismissal and flexible labor schemes. In Calabarzon (Region IVA, comprising Cavite, Laguna, Batangas, Rizal and Quezon), 70,000 workers have been retrenched from the last quarter of 2008 until July 2009.

“The capitalists are using the global crisis as an excuse to retrench the workers or implement flexible labor schemes,” Torres told Bulatlat. He cited as examples the Intel Philippines and IMI, an electronics company, that dismissed their regular workers and later on hired contractual workers. 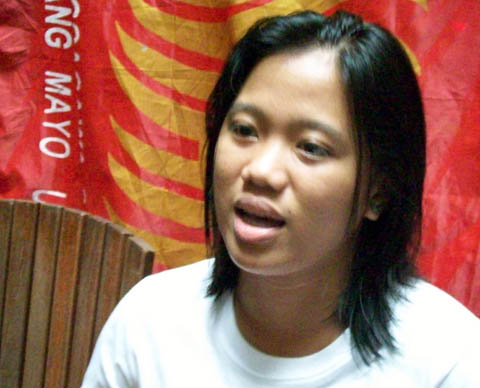 “They take on odd jobs in order to survive,” Torres said. Some work in the construction or drive a tricycle, jeepney or pedicab for a living.

Workers of ChongWon Fashions, Phils Jeon Garments and Golden Will Fashion Phils who were slapped with grave coercion and direct assault by their management also joined the Lakbayan.

For those who still have jobs, Torres said their take home pay could not even take them home. With P278 to P305 minimum wage in the region, workers can hardly feed their families. As of September 2008, the National Economic and Development Authority (Neda) pegged the daily cost of living for a family of six at P804.

Torres said more than 500 workers from Pamantik joined the Sona protests in Manila.

Unlike Kiamzon and Torres, tt was Ronalyn Franca’s first time to join the Lakbayan. A first year development communication student of the University of the Philippines in Los Baños (UPLB), she was encouraged by leaders of the University Student Council (USC) to join.

For Franca, Lakbayan is an eye opener. She was struck by the speech of Peter “Tata Pido” Gonzales, a peasant leader. “He told us the ills effects of charter change. He said that if in the past, dogs were the only ones who collect leftover food from garbage, these days people compete with the dogs for leftover food.”

“If charter change will prosper, poverty will worsen. Arroyo allows people to suffer from her wrong policies,” Franca said.

Franca grew up in Bicol and it was also her first time to roam around Metro Manila at night. “Why are there many people sleeping under the bridge?” she asked, adding that the housing program of the Arroyo government obviously failed.

She also said that the Arroyo government does not give priority to education.