At 15, Franca said she has come to understand the role of the youth in today’s situation. “We have not been called iskolar ng bayan (scholars of the nation) for nothing. We need not be afraid to fight for our rights. Let us not be blinded by lies and deception. We must see the truth that we are not free,” Franca said.

Christine Macabetcha, deputy secretary general of Bagong Alyansang Makabayan (Bayan) in Southern Tagalog (Bayan-ST), said they are overwhelmed by the warm welcome of the people. “They were receptive to our Lakbayan. They would give us water and food,” Macabetcha said. 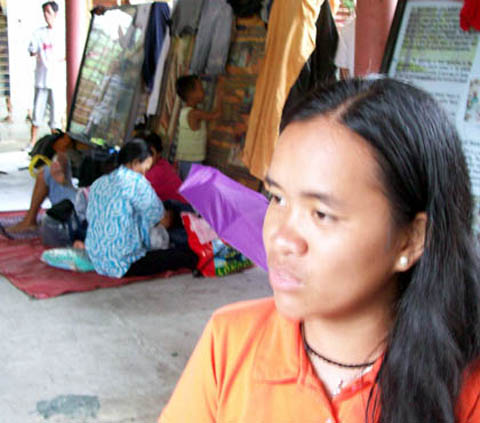 People would go out of their houses. Some would clap, others would raise their fists and say “Go! Oust Gloria [Arroyo]!” “That is how they express their support. Some would stay with our vigil and talk to us. Our tiredness goes away,” Macabetcha added.

The young Bayan leader said that people know that charter change means term extension for Arroyo and greater suffering for the Filipino people. “We did not have a hard time explaining [the impacts of charter change], they already know,” she said.

Macabetcha said the mass movement in Southern Tagalog will continue to persevere amid repression by the regime.

The region has been declared one of the priority areas in the government’s counter-insurgency program Oplan Bantay Laya (OBL-Operation Freedom Watch). According to Karapatan-Southern Tagalog, 178 have been victims of extrajudicial killings in the region. Human rights group also documented 3,451 victims of human rights violations from 2001 to March 2009.

Progressive leaders in Southern Tagalog have also been slapped with fabricated criminal charges. Two of these cases, the ones filed in Oriental Mindoro and in Batangas, have been dismissed. Another case is pending in Rizal.

“It is not a crime to fight for the rights of farmers,” Kiamzon, the farmer from Silang, Cavite, said. His three colleagues at Kamagsasaka — Ka Renato Alvarez, Mel Valdez and Rogelio Galit — are facing trumped-up criminal charges.

“Arroyo still failed. The more she continues repressing us, the more we fight for our rights,” Kiamzon said.

Asked if he is not afraid for his own safety, Kiamzon said: “If all of us would be frightened, who else would be left to fight? It is best to die with dignity.”

Macabetcha said the people of Southern Tagalog have a glorious history of fighting dictatorships. “During martial law, many took to the hills and others continue with their clandestine work in the cities. Our martyrs provide us inspiration,” Macabetcha said.

For Pamantik’s Torres, the fight is far from over. “A one or two Lakbayan would not be enough for workers to get their just demands. This is not the kind of government that will advance the interest of the working class,” he said.

“So long as hunger persists,” Macabetcha said, “people will not get tired of the struggle. Poverty fuels revolution.” (Bulatlat.com)