For Doing Its Job, CHR Is Now Under Attack

The Philippine military, through its attack dogs Pastor Alcover and Jovito Palparan, are trying to discredit the Commission on Human Rights and its chairperson, Leila de Lima. Human-rights groups are understandably concerned. “Now that the CHR chairperson insists on the mandate of the commission, they consider her as an enemy,” Marie Hilao-Enriquez of Karapatan said. “That is the most dangerous mindset.”

MANILA – For years since it was established, the Commission on Human Rights (CHR), a supposedly independent constitutional body whose head is appointed by the President, has struggled to gain some respect. Many had doubted its capacity to fulfill its mandate, even to be impartial.

As its leaders would readily admit, the CHR had been a toothless tiger – a perception made worse by the commission’s failure in the past to confront the government, particularly the Philippine military, for violations of human rights.

It came as a surprise to many, therefore, when the CHR began taking a more active role in recent years in investigating human-rights cases, particularly in the wake of the series of extrajudicial killings, enforced disappearances and torture. 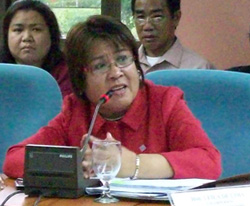 CHR chairperson Leila de Lima during a hearing of the Melissa Roxas case in Congress. (Photo by Fred Dabu / bulatlat.com)

The case of Melissa Roxas — the Filipino-American activist who claimed to have been abducted and tortured by soldiers and who, after going home to the United States, had gone back to the Philippines to pursue her case against the military — illustrates best this change at the CHR. Roxas did all that under the protective custody of the CHR.

To many human-rights advocates, it did not come as a surprise as well that the CHR itself had become the subject of attack for doing its mandate. Nothing illustrated this best than the CHR hearing on Roxas’s case on July 29, when Rep. Pastor Alcover Jr. of the anti-communist group Alliance for Nationalism and Democracy (Anad) asked CHR chairperson Leila de Lima if she was related to Juliet de Lima, the wife of Jose Maria Sison, the founding chairman of the Communist Party of the Philippines.

Alcover apparently sought to discredit de Lima and the CHR investigation itself by trying to link de Lima to the communists. Earlier, Alcover alleged that Roxas was a communist guerrilla.

“I take offense in that kind of stance. What are you trying to insinuate?” de Lima told Alcover during the hearing. “Is this part of your psy-war? Are you questioning the credibility of the CHR chair?”

De Lima told Alcover and former Maj. Gen. Jovito Palparan Jr. of the Bantay party list, who also attended the hearing, not to muddle the issue. Alcover and Palparan were summoned by the commission to testify and present the alleged video and photographs showing Roxas as a member of the New People’s Army (NPA). The NPA, led by the CPP, has been waging a people’s war for four decades.

Palparan also questioned de Lima’s statement saying that Roxas’s affiliation is irrelevant to the ongoing investigation of the CHR. He said further that Roxas’s testimony is a mere propaganda against the military and the government. Palparan has been called “The Butcher” by human-rights advocates for the trail of blood he left behind in places where he had been assigned. Alcover is a self-proclaimed anti-communist crusader.

In a statement to the media the next day, de Lima confirmed that Juliet de Lima is a distant relative. “I neither denied nor concealed that. Why are the two gentlemen making a fuss about that?” she said.

“Why are they so threatened by Roxas’s case that they are on full offensive?” de Lima said. “It seems that their personal crusade is to block an inquiry whose goal is to search for truth. Why are they so frightened of such scrutiny? No one is respondent yet because no one has been identified so far. Does anyone feel alluded to for past acts?”