Under the Gun: Lumad School Rises Amid Conflict, Military Atrocities

“But what about the chicks?” came the follow-up, panicked question. And so they solved this by cutting holes in water gallons and putting a few chicks inside.

The schools in these Surigao del Sur Lumad communities were founded during a lull in military activities in the area in the ‘90s. Cooperative stores that buy basic goods in bulk were put up by the Lumad group Mapasu (Malahutayong Pakigbisog Alang sa Sumusunod, or Persevere in the Struggle for the Next Generation) in the remote communities to help lessen the people’s transportation expenses.

The Lumad folk were undoubtedly benefiting from their efforts for education and development – until the first major massive military operations in 2005. Since then, it has become only a two-year break until the next disruption in the village folk’s lives, usually timed just before harvest or planting season. 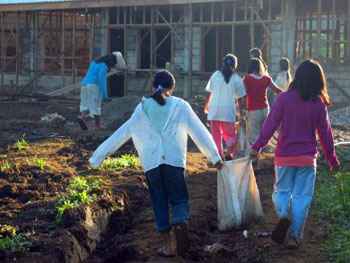 Aside from learning, students also help build communities. In this picture, they help construct a school building. (Photo courtesy of Mapasu-Alcadev / bulatlat.com)

This year, military officials claimed they are in the communities to implement “development projects” as part of the “Kalayaan sa Barangay” Program of the Armed Forces of the Philippines.

But Myra, an 18-year-old Manobo student of Alcadev, recalled how scared they had been when the soldiers came to Han-ayan, one of the Manobo villages. She recalled what a soldier said about Alcadev when the 58th IB arrived on July 13: “This looks like a training field of our enemies,” she quoted the soldier as saying.

“We were scared because of prior incidents. In 2005, four went missing,” Myra said.

Myra was referring to the Casil family of Arnulfo, Lolong, Lowi and Joel Amahan who were forcibly taken by 58th IB soldiers on May 5, 2005. The four, all residents of Magkahunaw, San Agustin, were abducted in exchange for the release of Arnulfo’s two sons, Junrey and Ranly, who, even as minors, were forced to act as guides and used as shields by the soldiers who were in pursuit of NPA rebels.

Also in 2005, another Manobo Magkahunaw resident, Jessie Bacasmas, was shot by a soldier as he was packing his family’s things into an evacuation truck. He died from loss of blood after soldiers stopped and delayed the evacuees’ truck at a checkpoint. Two years later, in 2007 came another heavy deployment of soldiers chasing after NPA rebels.

Amor, a TRIFPSS student in Tago, recalled that soldiers positioned themselves at the ground floor of the school house, and disrupted the classes being held on the upper level. When the children sang, they also sang. They gave answers when the teacher asked questions. They cocked their guns, scaring the children. And after classes, the soldiers entered the classrooms, so that when the children came to school the next day, the floor was all muddied with boot prints.

The Diatagon communities again left their upland homes and farms. The Lumads left most of their valuables and farm animals in care of the soldiers who were left behind in the villages. And when they returned, their homes were ransacked and ravaged, and all the pigs, chicken and other farm animals were gone. Their pots, pans, and other valuables were gone. (See sidebar)

At the evacuation center, Magbanua said the Alcadev students continue their education, turning the negative into positive. This time, they are given tasks around the evacuation site, helping out in the distribution of food and treating the sick. “These are like lessons in camp management,” Magbanua said.

Magbanua said that although the Lumad schools began and thrived during a time of peace in the Lumad communities, it carries on its mission even in times of crisis.