The International Day of the Disappeared on Aug. 30 was marked in the Philippines with a ringing of the bells to honor those taken by the regime — a warning to the government that the families left behind by these desaparecidos “are watching” to make sure that, soon, “we will get the justice we deserve.”

These letters and numbers have been etched into Flora Cedro’s memory for more than two decades now. DVD 507 was the license plate of the car used by the men who took Flora’s husband, Armando Sr., in 1988.

“I was not there in our house when they came for Armando but our son saw what happened,” Flora recalled. Armando, she said, was down on his knees, blindfolded, his hands tied behind his back and then forcibly taken out of their house.

Flora, 61, said it has been hard living without her husband. It’s not only because she had to bear the responsibility of raising their family – what’s more difficult is the despair of not knowing what really happened to Armando. She believes he will come home soon.

Flora was among the hundreds of relatives and friends of desaparecidos – the disappeared – who gathered at the Bustillos Church in Sampaloc to mark the International Day of the Disappeared on Aug. 30. Members of Desaparecidos, a group of the disappeared, and other progressive organizations formed a human chain, holding photos of the desaparecidos. It was in front of this church that activists Joseph Gonzales, Mario Detroz and Rolando Comiso were abducted five years ago. 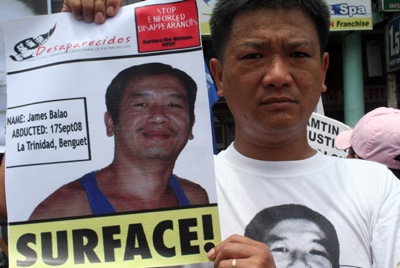 Enforced disappearances – or the abduction by suspected state security forces of activists and government critics – have been a human-rights nightmare since the Marcos dictatorship, whose martial-law regime murdered and snatched activists with impunity.

According to human-rights groups, the regime of President Gloria Macapagal-Arroyo has proved no better than the Marcos dictatorship, with more than 200 desaparecidos since she took power in 2001. Enforced disappearances is just one of the methods used by the regime as it wages a brutal war against critics and leftists and suspected communist guerrillas and their sympathizers.

One of those who participated in Sunday’s commemoration was Winston Balao, the brother of desaparecido James Balao, who helped found the Cordillera Peoples Alliance, a progressive organization that pushes for the rights of indigenous peoples in the northern regions of the country.

James was abducted on Sept. 17, 2008. “Witnesses told us that five armed men abducted my brother around 8:00 a.m.,” Winston told Bulatlat. “But when my brother tried to resist, the armed men told the witnesses that he was a drug pusher and he needs to be brought to Camp Dangwa.”

Winston said that their family went to Camp Dangwa to follow up on his brother’s “arrest” but were told that James was not in their custody. Since then, the Balao family has not stopped searching for him.

Like Flora and Winston, hope springs eternal for the other relatives of the disappeared.

“Most of the time, I just think that my brother, Leopoldo, is just being kept in one of the safe houses of the military,” said Rommy Ancheta. Leopoldo, a member of the negotiating panel of the National Democratic Front, was abducted on June 24, 2006. He supposedly had immunity but he was taken just the same. “I know that he is alive and I do not want to entertain the slightest thought that he is dead.”