You Are Here: Home → 2009 → September → 4 → In the Philippines, Human-Rights Advocates Live Dangerously

They are usually the first to respond to cases of extrajudicial killings, torture and enforced disappearances in the Philippines. In a country where impunity prevails, these human-rights defenders have not been spared from the same atrocities that they are trying to stop.

MANILA — In his seven years of involvement in human-rights advocacy, Fred Caña knows very well the risks it entails in a country where impunity prevails.

Caña is the secretary-general of Karapatan-Negros. Like any other human-rights worker, Caña’s tasks include documenting cases of human-rights violations, helping out the victims, survivors and their families seek justice and demanding accountability from perpetrators. For all these, the usual suspects for human-rights abuses have subjected Caña to surveillance, red baiting and different forms of harassment.

“I have long accepted the possibility of getting killed because of this work,” he told Bulatlat, pointing out that many of his colleagues in Karapatan have been victims of extrajudicial killings the past several years. 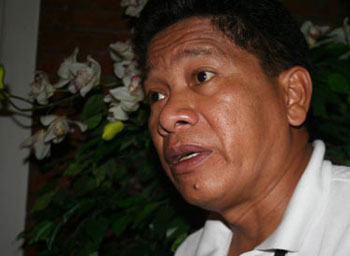 Caña is no different from other human-rights workers in the field. Karapatan’s newly elected national secretary-general Lovella de Castro told Bulatlat that there has been a systematic attack on Karapatan as an organization and on its individual leaders and volunteers especially in the wake of the heightened campaign against state fascism.

Although based in Bacolod City, Caña would usually go to communities where violations are committed. During the campaign against intensified military operations in Guihulngan, Negros Oriental, soldiers of the 11th Infantry Battalion (IB) of the Philippine Army burned down an effigy of Caña, declaring him as persona non grata.

The soldiers had been encamping inside the barangay (village) halls of Guihulngan, sowing terror on the local residents. In Barangay Linantuyan, the soldiers have set up the so-called Barangay Defense System (BDS), “mobilizing” the residents against the insurgents.

In one of the rallies organized by the local peasant group Kaugmaon in July 2008, soldiers from the 11th IB harassed the protesters and publicly labeled Caña as a spokesman of the New People’s Army (NPA). The NPA, the armed wing of the Communist Party of the Philippines (CPP), has been waging a Maoist revolution for four decades now.

It has also been a habit of the military to label Caña as a communist in a military-run radio program in Bacolod City.

Caña knows that he has been under surveillance but still, he never expected the military to visit his mother in their hometown in Sipalay, 180 kilometers from Bacolod City. The soldiers asked for his whereabouts and told his mother: “Your son is in the hills fighting with the NPA.”

There were moments when Caña thought he would be killed. Sometime in December 2006, Caña and his wife Tess were riding a tricycle on their way home when a man took the back seat and ominously showed his 45-caliber pistol to the couple. At another time, when the couple was buying rice from a store, a man sat in front of Caña and showed him his gun. Another buyer came, prompting the armed man to leave the store.

Two weeks after the incident, the then commander of the 61st IB, Colonel Leodivic Guinid, approached Caña and invited him for a “small talk.” Caña quoted Guinid as telling him: “Fred, you are still young. Why don’t you leave your work and start anew?” Caña, who is 44 years old, said Guinid went on to lecture him against communism.

Even Lawyers Are Harassed

Even human-rights lawyers are not spared from attacks. Kathrina Castillo, former secretary-general of Katungod-Sinirangang Bisaya, a regional human-rights alliance in Eastern Visayas, received unusual invitations from the military, particularly from the 8th Infantry Division of the Philippine Army based in Catbalogan, Samar.

On Feb. 9, Castillo received an invitation from Lt. Col. Roldan A. Radaza of the 8th ID to be their guest of honor and speaker in the military’s awarding ceremony the following week. Castillo did not attend but sent an open letter to the Armed Forces of the Philippines. In her letter, Castillo cited numerous cases of human-rights violations in the region perpetrated by state security forces, including three massacres.

In his response, Maj. Gen. Arthur Tabaquero claimed that Castillo has become the “unwitting victim” of the CPP/NPA’s deception and lies.