Questions Linger on Murder of Attaché

Finardo Cabilao was known for investigating allegations of abuses committed against OFWs in Malaysia. He often went out on a limb for these OFWs. Relatives, friends and nongovernment groups believe that Cabilao was brutally murdered because of this.

MANILA — Finardo Cabilao, a social-welfare attaché of the Philippine embassy in Malaysia, would have turned 50 on August 16. But a few days before that big day, on August 7, he was found brutally murdered in his apartment in Kuala Lumpur.

Authorities initially described Cabilao’s death as an “unfortunate incident” but some see more in it. Cabilao, after all, had been a dedicated and hard-working employee; his work may have contributed to this murder.

In fact, Cabilao had been receiving death threats before he was killed, according to Ferdinand Gaite, national president of Courage, the progressive group of government workers. “This means that it is not just an ‘unfortunate incident’ as the Department of Social Welfare and Development has been saying.”

Cabilao’s sister Leonarfina told Bulatlat that she had insisted to see her brother’s body when it arrived on August 14. “There were holes in his chest because he was repeatedly stabbed with a ballpen,” Leonarfina said. Cabilao’s face was wounded. His nose was broken and so was his left shoulder. She added that his nails had been pulled out, although Ambassador Victoriano Lecaros had told the family that the nails “fell off” Cabilao’s frozen body while it was being brought home.

Gaite said it is clear from the state of Cabilao’s remains that the murder had been planned, that Cabilao had been targeted for elimination. “If those who are tasked to give protection cannot protect themselves,” Gaite said, “how else can they give protection to those who really need it?” 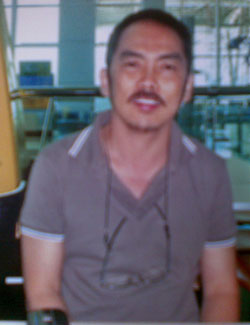 The deployment of social-worker attaché overseas started after the passing of the Republic Act No. 8042 or the Magna Carta for Overseas Filipino of 1995. Their job is to to check the safety and welfare of OFWS and investigate their complaints.

Leonarfina would always remember her brother as kuripot. “In one of his trips, my brother asked me what I wanted for pasalubong, so I told him I wanted a bracelet. But when he came home, he asked me to pay for it,” she said, amused.

“He was a very hardworking student then. Kuya would sell newspapers, eggs and softdrinks to earn extra money,” Leonarfina said. “At a young age, he was very independent.”

Indeed, Cabilao brought these values to work, as he rose from being a social-welfare worker to director of the Social Technology Bureau of the DSWD and, finally, as a social-welfare attache in Malaysia.

Manuel Baclagon, vice president of the Social Welfare Employees Association of the Philippines (SWEAP) and one of Cabilao’s former staff members, remembered him as a frank, happy, reliable superior. “He did not care if you were late to report for work as long as you finished your job for the day,” he said.

Migrante International vice chairperson Roy Anunciacion said that he has witnessed the rampant human trafficking in Malaysia when they went there last month for a fact-finding mission in the palm-oil plantations in Sabah. “He speculated that Cabilao might have run against a “large syndicate” there.

Since he was installed as a social-welfare attaché in Malaysia in 2008, Cabilao handled 177 cases of abused and trafficked Filipino migrant workers. “He would join rescue operations of the victims of human trafficking in Malaysia even if it is no longer part of his job,” Baclagon said.

Gaite said Cabilao seemed to have been very dedicated to resolve cases of abuses of OFWs, most especially to prostituted Filipino women in Malaysia.