Trouble in Paradise for 300 Filipino Workers in the Maldives

The OFWs have not been paid their salary in the last five months. To survive, they collect rain water to drink and, for their meals, catch fish from the beautiful sea water of the Maldives. Back home, their families are starving while the Department of Foreign Affairs dilly-dallies.

MANILA — Working abroad is a forced decision for many Filipinos. They endure the painful separation to give their families a better future. But when their sacrifices entail drinking rain water to quench their thirst, catching fish for their meal, and get no salary for work done, it’s only a matter of time before they realize that it is not worth it.

Nearly 300 overseas Filipino workers in the Maldives, the so-called island paradise in the Indian ocean known for its breathtaking beaches and luxury resorts, have been going through this experience in the last five months. And they want to go home immediately.

They had earlier signed a 15-month contract with their employer, Ashley Builders Corporation, which stipulated a monthly salary of $300 with free food and accommodation.

“My husband left for the Maldives on March 15 this year and started working five days later. But five months since then, they have not received a single centavo of their salary,” said Myrna Grimaldo, wife of Randy Grimaldo, during a press conference on Wednesday at the offices of Migrante International. Grimaldo is one of 60, out of the 300, who have so far sought Migrante’s assistance. 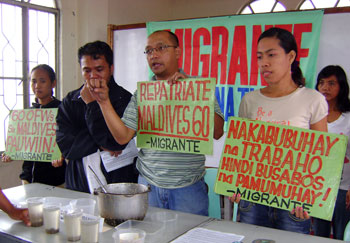 The families of the OFWs in the Maldives during a press conference this week (Photo by Janess Ann J. Ellao / bulatlat.com)

But later on, the OFWs realized that money was not their only problem. Because after a month of “adequate and nutritious meal,” they were no longer given food. They had to find part-time jobs so they can purchase food and personal things such as soap and medicines.

Since what they were earning was not enough, Myrna said her husband had to catch fish after a long and tiring day at work. The OFWs also had nothing to eat but porridge for their meals. “We in Marinduque are poor and we also eat porridge. But it’s only for our merienda,” Myrna said. “How can porridge properly sustain a body working for a construction company?”

As if porridge was not enough, the OFWs had to collect rain water for their drinking water. “Since it seldom rains in the Maldives, they have to conserve it. They cannot drink as much as they want until the next rain comes,” Myrna told Bulatlat.

The families these OFWs left behind in the Philippines are faring no differently.

Supposedly, under the contract, $200 of the OFW’s salary would automatically go to his family back home. But since these OFWs do not receive their salary in the first place, their families are now heavily indebted.

“Aside from the debt that my brother had incurred before he left for the Maldives, my sister-in-law now has to avail of cash advances with interests in order to live,” said Rosemarie Velarde, brother of Christopher, one of the OFWs in the Maldives.

Myrna Grimaldo said that a certain Engineer Cristopher Morales, a local partner of Ashley in the Philippines, has been giving the families of the OFWs with cash advances. They were given a cash advance of 300 rufiya — around P1,200 — last May and 500 rufiya in the last week of August.

She said in the press briefing that although she has no knowledge of farming, she now tills their small patch of farm in order to bring home food for her four children.