You Are Here: Home → 2009 → October → 28 → Why Consumers Should Not Rejoice Over Oil-Price Rollback Enforced by Arroyo

While it is supposed to be based on the Oil Deregulation Law, the executive order mandating the recent price rollback in effect puts into question the wisdom of oil deregulation. Moreover, the oil companies have found a way to offset whatever “losses” they would incur in Luzon due to the EO: by overpricing in the Visayas and Mindanao. 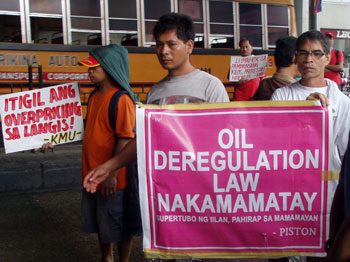 MANILA — Oil companies, including the Big Three, finally — albeit grudgingly — implemented the price rollback mandated under Executive Order No. 839. The move came with a threat of possible supply shortage and even long-term consequences on investments. But Malacañang looks determined to compel the oil firms to reduce their prices and warned them of sanctions should they fail to comply.

Consumers, however, must be cautioned not to rejoice too soon on what appears to be a positive step taken by President Gloria Macapagal-Arroyo. Remember that EO 839 derived its authority from Republic Act 8479 or the Downstream Oil Industry Deregulation Act of 1998. This is the same law that has legitimized the abuses of the oil companies in the past and which most likely will allow them to pass on the burden of complying with EO 839 to consumers.

EO 839 did not roll back the pump prices of diesel and gasoline due to overpricing but because there is a state of calamity in Luzon. That is why oil companies are claiming that they will “sell at a loss” because of the order. Overpricing is, of course, already an established fact and only Mrs. Arroyo, Angelo Reyes, and the staunch neoliberals from the academe believe otherwise.

The Bagong Alyansang Makabayan (Bayan), in an updated study, said that on the average, petroleum products are overpriced by P5.48 per liter as of Oct. 20 – the day that oil firms hiked diesel by P2 per liter and gasoline by P1.25, which prompted Malacañang to issue EO 839.

Thus, oil companies can very well absorb the price rollback and still earn extra profits even if they implement the executive order. They will not incur losses because they are in fact making an extra P212.38 million daily on top of their regular profits at the expense of consumers. Four companies corner bulk of this amount – Petron is earning extra profits of around P82.19 million daily; Pilipinas Shell P63.5 million; Chevron Philippines (Caltex), P29.94 million; and Total Philippines, P9.56 million.

But if they could afford to reduce their prices and still earn, why do oil firms, in particular the big foreign players, oppose EO 839? The reason is more political than economic. While it is supposed to be based on RA 8479, the executive order in effect puts into question the wisdom of oil deregulation and affirms the argument that for public interest, the market should not be left to itself.

Oil companies could also recoup their supposed losses in Luzon, which is the only one covered by EO 839, from the Visayas and Mindanao by imposing even higher prices there. Indeed, just a day after announcing they will comply with Malacañang’s order, Shell and Caltex hiked the prices of kerosene, diesel, and gasoline in Cebu in an obvious attempt to offset the impact of EO 839 in Luzon.

Keep in mind that the principle of deregulated prices still applies despite EO 839 and under this dogma, supposed “market fundamentals” will determine oil prices in the Visayas and Mindanao. Note that Petron, Shell, and Caltex together control 96.7 percent and 87.1 percent of the market in the Visayas and Mindanao, respectively and thus there is no real challenge to whatever price levels they will impose there.

Pump prices in these regions are already historically much higher than those in Luzon because of more intense domination by the oil cartel. To illustrate, the retail price difference between petroleum products in Metro Manila and Cebu reaches as much as P8 per liter, according to a survey by the Cebu Chamber of Commerce and Industry (CCCI). EO 839 thus puts additional burden on the consumers in the Visayas and Mindanao who will be forced to subsidize the profits of the oil companies.

Furthermore, EO 839 is not clear as well on what would be the official policy in case price levels fall below the mandated Oct. 15 prices. In this situation, Luzon consumers will end up paying more.

Lastly, because government does not control oil imports and supply, it does not have any real power to implement the price ceiling it imposed in Luzon. As warned by oil companies, they could just simply stop importing instead of selling at below market prices and suffer losses. Will government, in a deregulated environment, penalize oil companies for making a “business decision” in the interests of their investments?

At least 87.2 percent of the domestic oil industry is monopolized by Petron, Shell, Caltex, and Total and they could easily manipulate a supply crisis to force government to back down on EO 839. Again, this will be at the expense of consumers. Public alarm over an artificial supply shortage would further drive up prices nationwide due to speculation and panic buying and will make consumers more vulnerable to the oil companies’ greed.

All these underscore the deep-seated and fundamental defects of the Oil Deregulation Law and the neoliberal principle of deregulation. Government would never be in a strong position to curb the abuses of the oil cartel and protect public interest even in times of calamity as long as the downstream oil industry is deregulated.

The calamity known as oil deregulation has been making the Filipino people suffer from the abuses and greed of the oil cartel long before Ondoy and Pepeng came. To immediately correct this, the only option is to repeal RA 8479 and for government to impose nationwide price regulation, implement centralized procurement of crude and refined oil, maintain a buffer fund and supply, and substantially participate in refining, marketing and storage, among others. As the process of repeal is going on, a nationwide rollback of P5.48 a liter and a moratorium on oil price hikes must be simultaneously implemented.