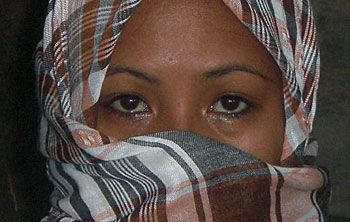 MANILA — Lawmakers who went to the Middle East recently expressed shock at the plight of the Filipino domestic workers there. They urged the government to promptly ban the deployment of workers in domestic workers or “household service workers” category. Along with other recommendations they will give once they finished their report, they vowed to include the ban in laws they are currently crafting for migrant workers.

The lawmakers also urged the government, particularly the Philippine Overseas Employment Administration, to punish agencies and “give examples” to their kind so they will think twice about doing illegal recruitment or contributing to the abuse of Filipino domestic workers.

“Even Gabriela Representative Luz Ilagan got a taste of the cultural differences and resulting discrimination of Filipinas in the Middle East,” recounted Rep. Carlos Padilla who went there on congressional mission with Ilagan and Rep. Rufus Rodriguez.

In the Middle East, a woman cannot come out alone; she has to be accompanied by others. There are also designated sections in many places, including airports and hotels, where women cannot enter even if they are accompanied by men, but Padilla noted they allowed Caucasian women there. Women also have to don an abaya, a kind of clothing that covers the whole body except the face, feet, and hands.

The lawmakers had personally interviewed Filipino “runaways” in the Middle East. At the time, they numbered around 500 and were taking shelter in five different Filipino shelter houses scattered in Saudi Arabia, Jordan and UAE. The number keeps changing, the lawmakers explained, because everyday, some got repatriated while new ones turn up at the shelter houses after escaping their employers.

It was amazing how the OFWs can manage to escape, Ilagan said. As majority of the runaways are Filipino women, they cannot just walk out into the street and go to the Philippine embassy or labor office for help. The tales of their escape alone and how they survive in shelter houses can already fill a notebook of incredible woeful tales, exclaimed Ilagan. As example, Padilla recounted the story of one of the runaways who hid inside the garbage bin while awaiting rescue of representatives of the Philippine embassy or labor office

Most were women domestic workers, or household service workers as the POEA calls them. They arrived in the Middle East to work but get maltreated and abused. Runaway Filipinas complained of being overworked; unpaid, not fed or allowed to sleep. Some were even lent out to other households. Some were verbally and sexually harassed and abused. Others were raped.

At the shelter houses, their hopes to go home hopefully with their salaries were often delayed by improper documentations their recruiting agencies had resorted to to bring them to the Middle East. Their repatriation is also being snagged by counter accusations of their employers. They were being charged all sort of crimes, sometimes as “absurd” as the case of a raped Filipina who was accused of stealing a refrigerator she couldn’t have carried by herself, let alone sell or bring anywhere there, said Ilagan.

The Philippine government has reacted to similar woes of migrant Filipina domestic helpers with a “package of reforms” since 2006. They required a skills upgrade of domestic workers and imposed on contracting countries higher minimum salaries for Filipino domestic workers.

But under a regime of encouraging labor export, these reforms only encouraged “creative counter measures” from recruiting agencies and prospective employers abroad. Illegal deployment and trafficking for instance, Ilagan said. Local agencies with partners in the Middle East scour the Philippine provinces for recruits which they bring abroad without passing through POEA.

The lawmakers hoped their recommendations would be enforced even before the upcoming 2010 elections. Ilagan worried that despite the hundreds of runaways sharing their woes and expressing wishes to come home, more Filipinas are still being flown to the same abusive and exploitative conditions they had run away from.

The lawmakers urged the government to enter into bilateral relations with Middle Eastern countries where OFWs abound. At the very least, reasoned Padilla, despite the Middle East laws against women going out on their own, a Filipina must be able to go out by herself and seek help from the Philippine embassy or labor office without being arrested or charged.

Ilagan also said a partylist representation for migrant workers can also help a lot. A sentiment which a delegation of repatriated, abused overseas workers and the MIGRANTE readily agreed with. The findings of the House Committe only affirmed what Migrante has long been saying, said Garry Martinez, chairman of Migrante International. “The Philippine government is doing a pitiful job of protecting the rights and welfare of Filipino workers, especially in the Middle East, the no.1 destination of OFWs.“

“When OFWs are in trouble, more often than not it is migrant organizations like Migrante who come to their aid,” Martinez said, adding “it is only just that we are given the chance to participate in the 2010 elections.”