Unlike other post-martial law administrations from Aquino to Ramos to Estrada, which used assumption of jurisdictions (AJ) mostly to quell already ongoing strikes, the Arroyo regime has used these orders not only to quell ongoing strikes but also to make sure that legitimate complaints by workers do not develop into a strike. As a result, fewer strikes have been recorded, allowing Arroyo to claim that “industrial peace” is improving. Nothing could be farther from the truth.

MANILA — President Gloria Macapagal-Arroyo had barely warmed her seat in Malacañang when her administration significantly increased the use of assumption of jurisdiction (AJ) orders to quell workers’ strikes. From 2002 to 2003, AJ orders emanating from her labor secretary increased three-fold. In this decade, the years 2003 to 2005 saw the highest number of labor disputes muzzled with AJ orders.

In fact, from 2003 up to present, the Arroyo administration never gave workers a chance to win strikes. The number of AJ orders issued by her labor department always exceeded the number of actual strikes since 2003 up to present. (See table below). This suggests that during much of this decade, most if not all of the strikes launched in this country had been stopped by the government — the striking workers ordered to return to work with threats of layoff and criminal charges if they resisted — while more labor disputes had been prevented from blossoming into actual strikes.

Unlike other post-martial law administrations from presidents Aquino to Ramos to Estrada, which used AJ mostly to quell already ongoing strikes, the Arroyo regine has used AJ not only to quell ongoing strikes but also to make sure that complaints by workers do not develop into a strike.

After the chilling Hacienda Luisita Massacre in which striking millworkers and farmworkers were killed and wounded in 2004, AJ orders slightly lessened but continued nonetheless. The controversial and still unresolved massacre occurred in the course of the Arroyo government’s implementation of an AJ order.

The deployed police and military elements opened fire to comply with their tasks, which, said Patricia Sto. Tomas, the labor secretary at the time, included assisting “in the clearing and removal of obstruction to and from the premises” of Hacienda Luisita and “maintaining peace and order” in the area.

Yet, Sto. Tomas had insisted that the AJ order “never indicated the dispersal of the rallyists.” But at the time she deployed military and the police to “assist in the maintenance of the flow of traffic within Hacienda Luisita,” some 6,000 millworkers, farmers, farmworkers and their families had been rallying for days in solidarity with the strikers at the premises of Hacienda Luisita. They looked like they were obstructing traffic.

Though Sto. Tomas was later forced to leave her post in the labor department, justice still eluded the victims of the massacre, not to mention the demands of the striking workers. Worse, according to Kilusang Mayo Uno (KMU or May First Movement), the use of AJ and “excessive, brutal force” in subduing workers’ protests continue to this day. 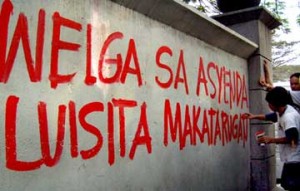 According to KMU, the killings were aimed at suppressing progressive unionism and formed part of the Arroyo’s counter-insurgency campaign. Combined with legal injunctions against what should have been legitimate democratic exercises such as holding strikes, all these serve to weaken the country’s labor movement.

In the fifth anniversary of Hacienda Luisita Massacre, KMU and Anakpawis Partylist reiterated their demand to clip the labor secretary’s power to determine solely for himself or herself if a certain labor dispute threatens the national interest and thus requires an AJ order.

Many Philippine unions have repeatedly brought the matter of the AJ and similar injunctions repressing workers’ actions to the attention of the International Labor Organization (ILO). As a signatory to international laws such as the Freedom of Association and Protection of the Right to Organize Convention (No 87) as well as the Right to Organize and Collective Bargaining Convention (No. 98), the Philippines is expected to respect and protect these rights and to respect if not promote unionism.