You Are Here: Home → 2009 → December → 20 → News in Pictures: International Migrants Day Marked with Protest and Calls for Repatriation of Stranded OFWs

News in Pictures: International Migrants Day Marked with Protest and Calls for Repatriation of Stranded OFWs 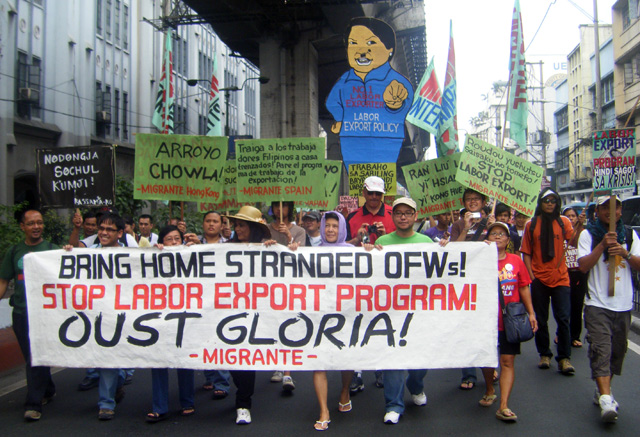 Hundreds of Overseas Filipino Workers (OFWs) on Friday marched to Mendiola Bridge to demand that the Arroyo government exhort all efforts to reunite more than 300 stranded OFWs with their families this Christmas season.

Families of stranded OFWs, together with OFWs from the Middle East, Italy, Hong Kong, Japan, Taiwan, Korea, and Australia held the protest action in commemoration of the 9th International Migrants Day. “Today marks the ninth year of the United Nations Convention on Migrant Workers and Their Families. While President Arroyo signed this convention, in reality, the plight of Filipino migrant workers did not improve and in fact worsened under the government’s relentless labor export program. Nine years under the Arroyo regime saw the unprecedented rise in human rights violations of OFWs,” said Garry Martinez, Migrante International chairman.

He said that Arroyo’s non-adherence to the UN Convention is proven by the fact that more than 300 OFWs, mostly victims of abuse and exploitation, are in need of immediate repatriation, according to the records of Migrante International alone. These include 89 caregivers who are victims of gross contract violations in Saudi Arabia; 51 female runaway domestic helpers at the Doha deportation center; 50 male detainees at the Jeddah deportation center; and 17 OFWs languishing in jail for crimes that they did not commit.

“It breaks our heart to think that these OFWs would spend another Christmas away from their families, when all it takes is the President’s political will to send them home. The Overseas Workers Welfare Administration have all the power and hard-earned OFW funds at their disposal. And yet the government refuses to fulfill its duty to citizens whom it pushes to virtual slavery overseas because of its failure to provide jobs at home and keep the economy afloat without the need for remittances,” said Martinez. 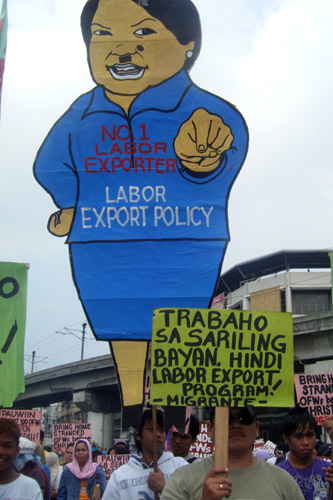 Migrante International’s records show that in almost all of the cases of stranded OFWs, Philippine consulate and overseas labor officials neglected the plight of OFWs, and were even the ones defending abusive employers and companies.

The Filipino migrant protesters, in a symbolic display of anger at the Arroyo regime, threw paint bombs at a picture of the President, as well as OWWA and Department of Foreign Affairs officials. 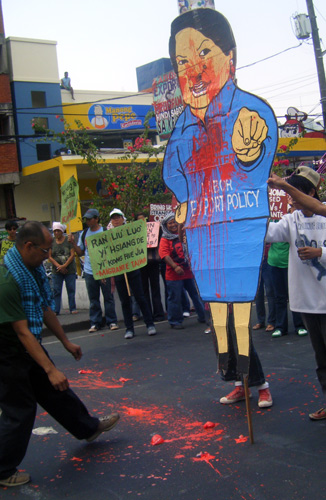 “Instead of celebrating what is supposed to be the day for us so-called ‘modern-day heroes,’ here we are, still being reduced to begging for Arroyo to hear our cries of despair. If she will not heed us our cry to bring home stranded OFWs for Christmas, then let the world know: this government has done nothing to protect migrants. It is migrants that must be protected from this government who systematically milk OFWs of their hard-earned money and have nothing to show for in return,” Martinez concluded. (Photos courtesy of Migrante International)