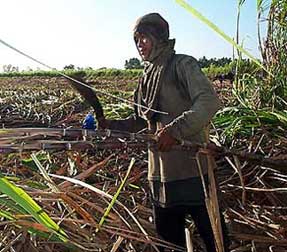 CEBU CITY — A group of sugar workers in Negros island was shocked to learn that the price of sugar in some parts of the country has reached a high of P60 per kilo amid news of an apparent crisis on the supply of the commodity.

“It is premature to declare that we are suffering from a shortage of sugar supply,” said Rundio Dagu-ob, national council member of the National Federation of Sugar Workers (NFSW). “How can they say that our sugar supply is depleting when in fact the milling season in Negros and other parts of the country is just entering its peak?”

The Negros Island, otherwise known as Sugarlandia, is the country’s biggest supplier of sugar, producing at least 60 percent of the Philippines’s sugar demand.

“We believe that this is a hoax concocted by sugar traders who wish to cash in on an apparent crisis scenario,” Dagu-ob said.

With the so-called crisis, an increase in the price of this valued commodity can easily be justified, Dagu-ob said, forcing the government to intervene by importing sugar from other countries at a high price, and selling it here at a subsidized price.

Dagu-ob maintains that collusion between sugar traders in the country and that of other countries could be possible, as both parties could greatly benefit from the crisis.

He said that the group is also surprised at the move of the Department of Agriculture asking for government, through the National Food Authority, to import at least 150,000 metric tons of sugar apparently to stabilize the price of the commodity.

“This is a first in eight years. For such a long time we have been self-sufficient in terms of supplying the local demand for sugar, in fact we are exporting sugar to the US because we have an oversupply of sugar here,” Dagu-ob said.

“This is uncalled for. In fact, the Sugar Regulatory Administration itself has declared that sugar production for crop year 2009-2010 is estimated at 2.16 million metric tons, even declaring that the country’s domestic sugar ending inventory to be at its normal level,” he said.

He said this move by the SRA is “not all about price stability” and branded it as a money-making scheme. “While farm workers are suffering from unfair labor conditions, from harassments, and below minimum wage, the government is conniving with unscrupulous traders to come up with a crisis that is nonexistent,” Dagu-ob said.

“And for what? To give these traders and hacienderos more money that they can use to make our lives even more miserable?” he lamented. “While we are the one producing sweet sugar, we cannot afford to buy sugar because many are living in extreme poverty and lack.”

Instead of encouraging traders to create a scenario of a crisis, Dagu-ob said government should look into the condition of farm workers and help them attain land, food, and a sustainable source of income.

Dagu-ob said government should be focusing on pushing for the passing of the Genuine Agrarian Reform Bill and not waste its time on “nonsense speculations and useless bickering.”

Ronald Ian Evidente, the spokesman of Kilusang Mayo Uno in Negros, suggested that instead of government focusing on the perceived problems, they should pay attention to the real problems hounding the labor sector, especially that of sugar workers.

“Arroyo and the House of Representatives must look after the consumers’ welfare and not the landlords and the sugar and oil cartels that are keen at manipulating prices to siphon profit from consumers. Wage increase is a must amidst this economic crisis,” Evidente said, adding that designating House Bill 1722 as an urgent bill would benefit the economy more than the importation of sugar. The bill calls for the raising of basic wages by P125 per day across the board.

“What’s the purpose of sugar importation? To project a ‘sugar shortage scenario’ and to justify sugar importation? Or is this a plot by both sugar barons and the cartel to raise funds for the coming 2010 elections?” Evidente said. (Bulatlat.com)