Katribu accused the MWSS and San Miguel of drumbeating a “water crisis” to justify the dam construction. “It misleads the public into thinking that the solution to the water crisis is to build a large dam. In doing so, it places indigenous peoples in a vulnerable position,” the group said.?

MANILA — Indigenous peoples’ groups and rights advocates demonstrated again their opposition to the P52-billion Laiban dam project, which entails the construction of a 113-meter high water reservoir to “augment the water supply in the metropolitan area.” ? 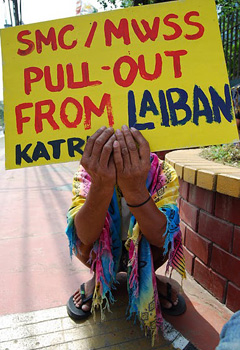 Since Jan. 19, a group of Dumagats from Tanay, Rizal, has been camping out in front of the office of the Department of Environment and Natural Resources along Visayas Avenue.

On Thursday, Feb. 25, the indigenous peoples’ groups held a dialogue with Metropolitan Waterworks and Sewerage System (MWSS) Administrator Diosdado Jose Allado. The MWSS is tasked to implement the project in partnership with San Miguel Corporation.

“We want to register our opposition to the Laiban Dam project and to know the status of the negotiations between MWSS and San Miguel,” Joan Jaime of the Network Opposed to Laiban Dam (NO to Laiban Dam) said at the start of the two-hour dialogue with Allado and five other officers and members of the MWSS board of trustees.

Jaime is national coordinator of the Kalipunan ng mga Katutubong Mamamayan ng Pilipinas (Kamp), which is the national alliance of several indigenous peoples’ organizations across the country.

With Kamp and indigenous peoples’ leaders of affected communities in Tanay, Rizal, were representatives of the Katribu Partylist, Bagong Alyansang Makabayan, Kalikasan-Philippine Network for the Environment, CARE Foundation, Kalingap and members of the Catholic clergy. 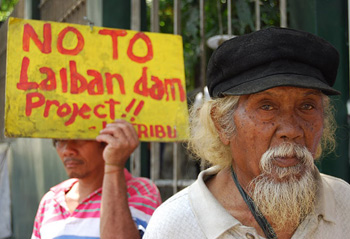 These groups have been clamoring for a dialogue with government officials directly involved in the impending contract-signing for one month already.

“It is not true that there are no protesters to the dam project in Laiban,” said Nelson Mallari, Katribu Partylist third nominee.

MWSS officials admitted that “the dam project is not yet canceled and, in fact, is being processed.” The environmental compliance certificateremains pending with the DENR. The free, prior informed consent as required by the Indigenous Peoples Rights Act is yet to be obtained from the concerned Dumagat villages.

MWSS deputy administrator Isaias Bongar said that once evaluated by the consultant, the proposal for the Laiban dam goes to the technical working group. It passes the joint venture selection committee, which would recommend subsequent action to the board of trustees. Bongar heads the committee.

“Aside from utterly destroying the ecosystems in the Sierra Madre, the Laiban Dam will also displace more than 20,000 indigenous peoples and peasants.” Mallari said. The large dam will submerge eight villages of mostly indigenous peoples in Tanay, Rizal and Gen. Nakar, Quezon.?

Mallari pointed out that the opposition to the dam stems from the imminent displacement of indigenous culture which, he said, is deeply rooted in the utilization of the land and its resources, including bodies of water.