Difficult Times Ahead for Fresh Graduates

Aiza Padilla, 21, endured the scorching heat of the sun and her grumbling empty stomach as she walked from one building to another along the business district of Makati City. She had just graduated a few weeks ago but she is already in a hurry to look for a job.

“I feel that it is my responsibility to my parents and siblings to find a good job as a form of gratitude for sending me to school,” Padilla told Bulatlat.

Padilla was born in Balayan, Batangas but lived with her sister in Tondo, Manila after she graduated from high school. Her elder sisters sent her to college and on March 21, Padilla graduated from Wesleyan College in Manila.

“Costly,” she replied when asked to describe how her job hunting has been. She explained that sometimes she has to choose between buying something to eat or skipping lunch to be able to save money for printing her resume’ and reproducing her pictures for her application.

“I want to apply to as many companies as I can. But most of the time, I do not have money for fare,” she said.

Padilla is not alone in experiencing difficulties in job hunting.

7 out of 10 Graduates would be Jobless

A recent study conducted by Ibon Foundation, an independent think-tank, revealed that only three out of ten college graduates who would enter the labor force this year could land a job. This means that seven out of 10 fresh graduates would enter the ranks of the unemployed this year. 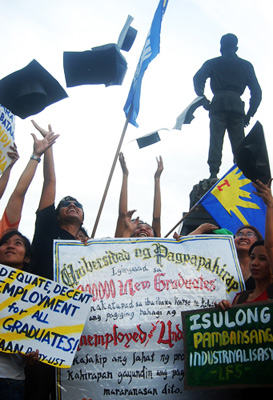 With 542,000 college students graduating this year, according to statistics from the Commission on Higher Education, and six out of ten graduates immediately joining the labor force, based on trends in the previous years, there would be 325,000 new college graduates who would be looking for work this year. Adding the 325,000 new job seekers to the 523,000 unemployed graduates as of January 2010 would result in 848,000 new and old college graduates competing for available jobs,” the report said.

Assuming that the trend in job generation would be constant, another 256,000 new jobs would be available for college graduates this year – the same as that of April last year, which was based on the Labor Force Survey of the National Statistics Office. Thus, 592,000 college graduates, both old and new, would end up jobless.

“That’s sad,” Padilla said when Bulatlat told her about the recent study conducted by Ibon. She said she pity all the parents who work so hard to be able to send their children to college. Padilla said her parents and siblings worked hard and scrimped on expenses to save money for her tuition, thinking that a college degree would be her ticket to a stable job. “But with this study, it seems that a college degree is no guarantee.”

During her training for her job as project coordinator, she was assigned to a shopping mall to promote the product. “I felt so embarrassed. I hid when I saw a high school friend,” said Aguila.
Aguila resigned from her job as project coordinator this January to look for a job that is in line with her training in college. However, she ended up in a real estate company, working at the customer service department. “It is totally unrelated to my course,” she said.

“Eventually, I want to find a job that is related to my course,” Aguila told Bulatlat, “I do not see anything lacking in me. I just think that the career I want to take is very competitive.”

Padilla thinks that the government is failing in its responsibility to generate local jobs, especially for fresh graduates like her. She added that there should also be equal opportunities for all, adding that graduates of popular and expensive colleges and universities corner the few jobs available for fresh graduates.

Padilla said she is challenging the candidates for president in the May 2010 elections to make job generation a priority. Padilla said if she does not get a decent job soon, she would consider working abroad, even as a domestic helper.

“This is a sad reality in the country because of the employment crisis. Our bright and competitive graduates are being pushed to go abroad when they can do so much more for the country,” Kabataan Partylist Rep. Raymond Palatino said in a statement.

Another option, Palatino said, is entering the Business Process Outsourcing (BPO) industry. But, said Palatino, BPOs are now implementing a standardized competency exam to streamline the recruitment of their applicants. “We could expect a lesser number of new graduates being hired,” Palatino said.

“This is supposed to be our ‘sunshine industry’. But we see no light shining for our new graduates if they continue to push through with these exams,” he said. (Bulatlat.com)