In a press conference, Migrante, along with OFW-victims of abuse and kin of migrant workers launched the Migrants Seven-point Covenant addressed to candidates to the May 2010 elections.  Candidates who sign the covenant commit to review and work for the repeal of existing laws that exploit OFWs and to propose new policies that will further protect the rights and welfare of OFWs.

Martinez said, “It is significant that several of the candidates for senator have committed themselves to work for the realization of the demands (of OFWs).  These demands have fallen on deaf ears under the Arroyo administration.”

“In the 35 years that the Labor Export Policy of the government has been implemented, six to ten dead OFWs return home on a daily basis and 60 others have been sentenced to death in Saudi Arabia alone,” Martinez said, saying that this is what they get in exchange for keeping the economy afloat with their remittances, especially in the face of the financial crisis.

The covenant is a list of seven demands that Migrante has consolidated. First in the list of demands is to hold President Gloria Arroyo accountable for crimes of corruption, plunder and violations of human rights. 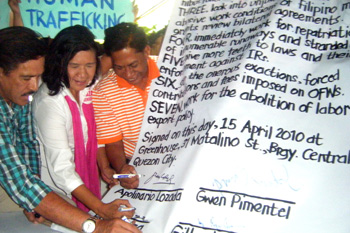 The covenant also seeks to review the bilateral agreements, which are contrary to laws that protect the rights of migrants, workers, and women, that were entered into by the Arroyo government with receiving countries.

It seeks improvements in on-site services and protection for OFWs, and an increase in benefits that accrue to them and their families. It demands for immediate legal assistance for OFWs in jail and in death row abroad, as well as urgent assistance for stranded OFWs who have escaped from exploitative working conditions.

The covenant also asks the signatories to author more laws that will prosecute illegal recruiters, human traffickers and exploiters of migrant workers. Migrante asked candidates to support and carry this covenant in their respective platforms should they be elected for public office in May 10.

In the said press conference, Makabayan senatorial bet and Nacionalista Party guest candidate Liza Maza talked about the government’s lack of action in dealing with cases of OFWs abroad, as well as those who have returned. “We are practically living by the sweat of OFWs and they deserve government protection for their working and living conditions abroad. The Macapagal-Arroyo administration is remiss in its duty to protect the rights and welfare of OFWs.”