You Are Here: Home → 2010 → April → 17 → Temporary Suspension of Job Orders, a Partial Victory for Victims of Annasban

Temporary Suspension of Job Orders, a Partial Victory for Victims of Annasban

MANILA — “A temporary suspension of all job orders coming from Annasban has been imposed by the Philippine Overseas Employment Administration (POEA) since Monday,” Migrante International chairperson Garry Martinez told Bulatlat. Migrante is the largest alliance of OFWs. Migrante has been actively campaigning for the victims of Annasban and other exploited OFWs as well.

The Annasban group is a leading supplier of manpower services in Saudi Arabia with migrant workers mostly coming from developing countries like the Philippines, India and Bangladesh. The top management of the company comes from the powerful AnNasban clan. In a report provided by Migrante International, the AnNasban clan is believed to have strong connections with the top bureaucrats of the Ministry of Labor of the Kingdom of Saudi Arabia (KSA).

This is not the first time that Annasban was issued a temporary suspension order. Because of numerous complaints, the POEA first issued a suspension order against Al Nasban Trading and Contracting on November 25, 2005. The said suspension was lifted on August 21, 2008 after Labor Attache Rustico dela Fuente commended Annasban for reforming its system.

However, during the almost three years that the suspension was supposedly in effect, the Migrant Assistance Committee of Migrante was able to document 176 cases of OFWs who sought repatriation because of problems in their contract with Annasban. After the suspension was lifted, more cases involving Annasban were documented.

“We are consolidating all cases that we have documented involving Annasban for submission to the POEA at the soonest possible time to make sure that a permanent ban will be implemented.

On December 26, 2008, barely four months after the suspension order was lifted, Gemma Vallarta, 27, went to Saudi Arabia to work for Annasban. “It is difficult to find a job here in the Philippines even if you are a college graduate,” Vallarta told Bulatlat, adding that her husband’s meager income as a tricycle driver was not sufficient to support their family. 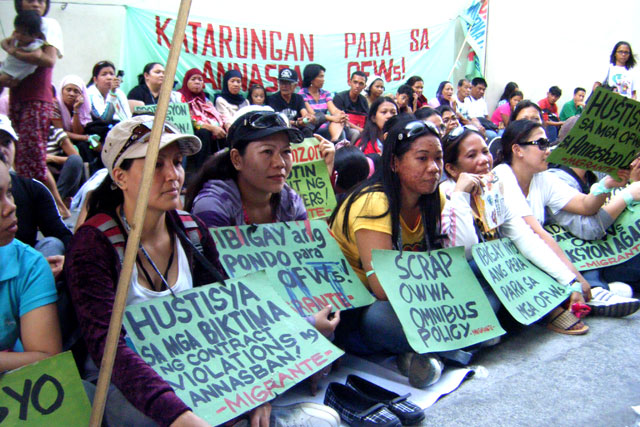 “I signed a contract stipulating that I would receive a monthly salary of 940 riyals and $50 food allowance,” she said. But upon arriving in Saudi Arabia, she and fellow OFWs were asked to sign another contract stipulating that they would receive a monthly salary of 650 riyals only, without the food allowance. “We were left with no choice because we were already there. We were forced to sign the new contract.”

Vallarta endured the months of hard work as caregiver for Markaz Taheel Mental Rehabilitation Center. As she was earning just enough for her upkeep in Saudi Arabia, she was able to send money to her family only twice during the eight months that she worked there. She was able to send home a mere P15,000 ( $314). On top of their sacrifices, they were provided with poor accommodations and working conditions. During the last week of August, 2009, Vallarta said, she and her co-workers felt that they could no longer stomach the abuse.

“We stopped going to work,” Vallarta said. “Our only demand was to implement the contract that we had signed in the Philippines.” But Annasban, Vallarta said, made it difficult for them to register their concerns. “We were not allowed to buy food and water. Since we were very thirsty, we had to drink the water from the toilet. All 23 of us who stopped working had to share one pack of instant noodles,” she told Bulatlat.