MANILA — I went to the polling area at exactly 7 am, hoping that I would not be subjected to long lines. When I arrived at the local elementary school, we were asked to line up to get our priority numbers from PPCRV volunteers. The line was long and the movement was slow. Voters started to complain, with the old couple in front of me saying that if this was just an election for the barangay council, they would have just left without voting. While at the line, another PPCRV volunteer approached us saying that there was no need to fall in line to get numbers. So we were wondering, how come the PPCRV volunteers at the end of the line kept on handing out numbers and this other volunteer said it was not even necessary? So we just kept in line and waited for our turn because we do not want to leave the line only to be told at the precinct to go back and get numbers. After what seemed like an eternity, I did get my priority number and a small slip indicating my name, cluster precinct number, which I already knew in the first place, and sequence number. 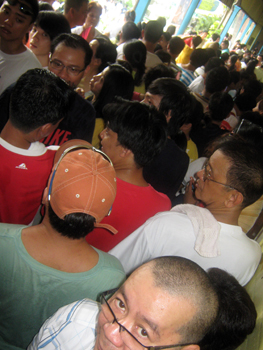 When I arrived at the cluster precinct, which was not easy to find as the signs are too small, the line was already very long. The line to our cluster precinct was already merging with the long line to the other cluster precinct. After the line got longer and longer, and the temperature hotter and hotter, another volunteer approached our line and told the other end, which was facing the other way to move toward the back of our line, to face toward the precinct. This incensed the people in front of us who complained:” Why are the people at the back of the line being made to go ahead of us!” So they were made to face the other way again. Then another volunteer made those with priority numbers to form another line. Because we were already almost in front, we refused to budge. So those with numbers and those with none were made to enter the precinct alternately. When I reached the cluster precinct, after two long hours, I had to queue again inside the classroom. Only ten persons are able to vote at the same time. Luckily, the PCOS machine operated smoothly. So it took me almost three hours to vote.

During the 2001, 2004, and 2007 elections, it took me a mere 30 minutes or less from the time I reached the polling area to the time I finished voting. Now it took me almost three hours!

And to think that I went to vote early, at 7 a.m. I could just imagine the queue and the confusion later in the day. Why? 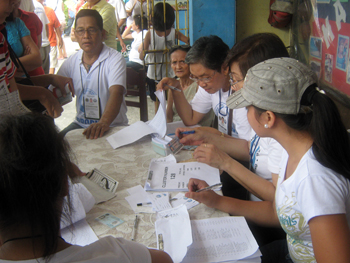 The PPCRV made its own system, when they were supposed to facilitate matters and assist voters to make voting easier. Why did the PPCRV decide to add to the process and on whose authority? Second, there were no step-by-step instructions on the process, not like in efficient government agencies such as the NSO, to guide voters on where to go. Third, the volume of voters and the time it would take to vote seemingly were not considered in the preparations by the Comelec so the BEI and the volunteers were caught unprepared when the queues got longer and longer.

It all seemed that everything was made more difficult. Some were saying that it seemed that it was done on purpose to discourage voters. This may not entirely be without basis. Watchdogs were already warning about the probable problems, but the Comelec simply ignored or was defensive about it. And to think this was a simple case of confusing systems and processes. As of this writing, sporadic gunfires and knife fights have already erupted in Maguindanao and PCOS machines have been breaking down in some provinces. Let us what would happen at the end of the day. (Photos by Benjie Oliveros /