May 2010 Elections, Neither Fair nor Honest – Foreign Observers

Eighty six foreign observers who constituted the Peoples’ International Observers’ Mission were amazed at the “disconnect” between what was reported in the dominant media regarding the conduct of the May 10 elections and what they actually observed in 11 provinces all over the country and two areas in the National Capital Region.

The largest delegation of foreign election observers to visit the country went to election hotspots in Abra in Northern Luzon, Pampanga and Tarlac in Central Luzon, Cavite and Quezon in Southern Tagalog, Albay and Sorsogon in the Bicol region, Iloilo in the Visayas, Davao, Surigao and Lanao del Sur in Mindanao, Tondo and Payatas in the National Capital Region. To cover more polling centers they further subdivided into teams with local members of peoples’ organizations.

After putting together all their observations, the observers concluded last Friday that contrary to rosy reports coming out in the dominant press about the “successful” conduct of May 10 elections, it was “neither fair nor honest.” They added that “Despite the government’s rhetoric, actual practice showed that it is not committed to free and honest elections.”

To make automated elections accessible, accurate, trustworthy and transparent, the PIOM listed more than 30 recommendations that are largely addressed to the Comelec and the Philippine government. The rest are for the Filipino people and for a bigger PIOM in the next elections.

They encouraged the Filipino people to call for an investigation and to make the Comelec, Smartmatic, the military and the Arroyo administration accountable for the bungled preparations for the elections, the numerous rights violations perpetrated in relation to the elections, and numerous “glitches” that had made voting and counting difficult, dangerous and doubtful for many Filipinos.

Usual Election Problems Plus the Automation

The foreign observers reported widespread voters’ intimidation, disenfranchisement, vote-buying, corruption and violence in all places they went to. They noted that the long lines, the missing names, the PCOS rejection of certain ballots, have all served to disenfranchise many voters last May 10.

All the PIOM groups observed a “systematic vilification campaign” against at least two progressive senatorial candidates, Satur Ocampo and Liza Maza, and eight progressive party list groups by the military and paramilitary groups such as the Civilian Armed Forces Geographical Unit (CAFGU).

While acknowledging that these election-related problems existed in the country before, the observers agreed these could only be partly solved, if it can be solved at all, by an automated election system, especially one being commissioned to a foreign firm, which, by all indications, was mainly concerned with maximizing its profits. The PIOM cited the skeletal staff employed by Smartmatic as proof of this.

“In focusing on the machines, the Comelec lost the people,” said a team of the PIOM. In fact, PIOM reports confirmed that the use of too few PCOS machines, which was also the reason for the clustering of precincts, resulted in long queues of voters who had to wait for hours under the scorching heat, without provision for food, water, and toilet facilities. The voting process, said the foreign observers, did not provide easy access to the elderly and the differently-abled.

Filipino voters also had a hard time finding their names in inconsistently organized voters’ lists, reported all PIOM groups. They said it prolonged or exacerbated the voters’ long wait.

The PCOS machines, meanwhile– aside from having been overwhelmed by 1,000 or more voters per clustered precinct — were also doubtfully secured and operated, noted the PIOM. “The voters have no way of verifying if what the machine recorded was what they have written in their ballots,” said the foreign observers. They added that not only do the voters have no way of knowing whether their votes were read accurately, they also could not check whether these were transmitted faithfully.

The foreign observers documented the appalling lack of security of the PCOS machines, the compact flash cards and the backup cards. They also noticed that the PCOS machines were “inconsistently locked or sealed,” with some PCOS machines bearing “obvious signs of being tampered with.”

The PCOS machines turned out to be overpriced lemons, agreed Carol Pagaduan-Araullo, chairperson of Bayan (New Patriotic Alliance) and convener of Pagbabago. “You don’t expect to see your newly-acquired expensive appliance to break down the moment you bring them home and start to use them,” said Araullo.

The PIOM documented the nationwide occurrence of breakdown of PCOS machines which can all be attributed to the Comelec’s and Smartmatic’s cost-cutting measures. In a a PIOM group’s interview with the Comelec director Emmanuel Ignacio in Tarlac, he admitted that 600 voters per machine are “more ideal” compared to 900 plus per machine. Ignacio told the PIOM only 1 modem per 3 precincts were allotted (and that explains why precincts were packed in the same schools). The PIOM group also learned that to further cut cost, the Smartmatic did not install cooling fans or cooling mechanisms in its PCOS machines, hence its proneness to break down from overheating. 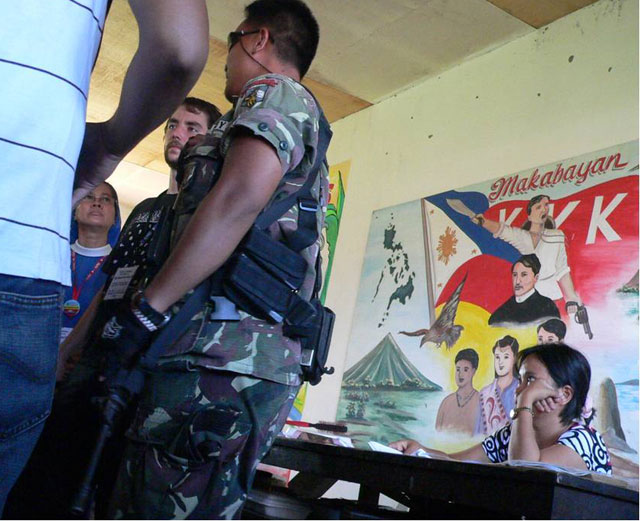 The foreign observers unanimously noted that armed groups including the military and police forces were visible at or near polling places, and they did not even make a pretense of appearing non-partisan as they were observed and documented to have actively vilified two senatorial candidates and eight progressive party-list groups.