Jim Gales And The Persecution of the Philippine Left

PANABO CITY — It is supposed to be celebration time for members of progressive partylist groups Bayan Muna, Gabriela, Anakpawis, Kabataan, and Act Teachers.

After all, they still managed to win seats in Congress in the recent polls despite attempts to prevent them from winning.

But instead of a victory party, they held a funeral for a young colleague who joined the list of the unsolved political killings in the country only nine days after the recently-concluded elections.

Jim Gales, a young volunteer of Bayan Muna in Southern Mindanao, could hardly find time to go home during the campaign season.

He was assigned as the leader of Bayan Muna’s “mobile propaganda team” in Davao City. Among his responsibilities was driving the vehicle that played on its trumpet speaker the Bayan Muna campaign jingle around town.

Corazon Espinosa, an urban poor leader who often accompanied Gales in the campaign sorties, remembered him as a dependable colleague. “He was the kind who would not refuse a request,” Espinosa said.

“He would drive the recorida (mobile sound system) around Davao alone, even when he barely had any sleep.”

Bayan Muna needed a driver and Jim’s father asked him if he could volunteer for the job. Jim had obtained a degree in automotive mechanic. His father thought that

Jim would take the job temporarily. 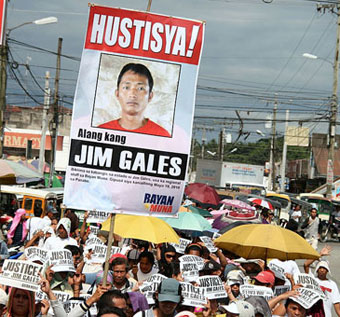 Progressive groups demand justice for the killing of Jim Gales, a Bayan Muna member, on May 19, 2010 by unidentified gunman.(davaotoday.com photo by Jose Hernani)

But when it was time to tell his son to find another job, one which could earn him a living, Jim chose to stay. “I could sense that he was already enjoying his work and the company of his colleagues so much,” his father said.

The sad news on his death came in the early afternoon of May 19, when a relative arrived at their door to tell him that his son was shot.

“I could not at first believe it. He was just here in the house. He came to borrow his brother’s motorcycle that morning. Then he came back again at around noon, this time, with a guy whom I just met. We had lunch together in the house,” he recalled.

When he came to the scene of his son’s death, he knew at once it was Jim. He saw the blue helmet near the body that was covered with a banana leaf. He recalled seeing shiny empty M16 shells near his son’s body.

Jim had been shot in the head and several parts of his body. Two cracks were found on the right side of his motorcycle helmet.

The place was near a banana plantation owned by a certain Nonoy Bangoy in Barangay Little Panay of Panabo City, just 32 kilometers from Davao.

Based on accounts his father heard at the crime scene, Gales was shot by gunmen who boarded a van at around 2 in the afternoon.

In late April, Gales told his colleagues he caught a man taking a picture of him at a shop in Matina where he brought the Bayan Muna recorida vehicle for repair.

Just like the many killings of activists that had taken place earlier, Gales’s father could not pinpoint the exact identity of the perpetrators behind his son’s brutal death.

“I only knew that many other Bayan Muna members were killed before him,” he said.

Gales’s colleagues believed that like many other victims of extrajudicial deaths, Gales had been put to intense surveillance prior to his murder.

Gales did not live to see the day that Bayan Muna was declared a winner in the polls.

His colleagues believe it was the dedication of volunteers like Gales that Southern Mindanao was able to turn in the highest votes for Bayan Muna among all other regions of Mindanao.

It used to be difficult for the disadvantaged section of the population to pitch their representatives in Congress through the traditional method of voting. Until the partylist system was introduced in the country in 1998, which allowed the marginalized sectors a chance to put their leaders in the House of Representatives. People voted for partylist or grassroots organizations, instead of voting for a single political candidate for every district.

In its first foray into mainstream politics in 2001, Bayan Muna got 11.5 percent of the total votes cast in the partylist elections, five times more than the two percent votes required to entitle Bayan Muna three seats in Congress. Such victory was paid for with a heavy price, according to Satur Ocampo, one of the forerunners of Bayan Muna.

He said that the first attempt of the Philippine Left to enter the parliament, through the former political party Partido ng Bayan (PnB), left 35 of their campaigners dead. Five of the congressional candidates that the progressive party supported were slain and three of its campaign headquarters were raided.

With the victory of Bayan Muna in 2001 elections, the “anti-communist hysteria” largely fanned by the Philippine military, also spread like wildfire.

Along with it, the Arroyo government also launched one of the deadliest anti-insurgency campaign, the Oplan Bantay Laya (OBL) (Operation Freedom Watch).

Although the military denies that such operation plan existed, human rights groups like the Ecumenical Movement for Justice and Peace (EMJP), one of the pioneering human rights organizations in the Philippines, cited military documents in their possession that confirmed the existence of OBL.

Human rights groups also noted that killings of political activists became rampant just when OBL was implemented by the Arroyo presidency in 2001.