MANILA— Current Commission on Human Rights (CHR) chairwoman Leila de Lima spoke to a national consultation of progressive unionists last Wednesday in what she described as her “probable last engagement” as CHR chairwoman. Incoming president Noynoy Aquino has appointed her as Justice Secretary in his administration.

“I myself have been very surprised (at this appointment),” De Lima told the unionists. She said she has “mixed feelings” over her new appointment, much like she had in March to May 2008 when president Gloria Arroyo first sent “feelers” and then appointed her as chair of the CHR. De Lima’s practice had been in election law prior to heading the CHR, where, she said, she faced a lot of challenges as well as worked like she’s an OJT (on-the-job training).

“I thought deeply about what I am going to say (here),” De Lima told the unionists. She candidly shared with the workers her feelings about her impending new job and the CHR she would have to resign from in a few days.

She decided to still face the unionists and workers, she said, because the theme of their gathering – organizing in the country’s economic enclaves where it is reported there’s an unwritten no-union, no-strike policy – is “very relevant,” “fitting,” and “related” to her “increased responsibilities” as soon-to-be justice secretary.

De Lima paid tribute to the Filipinos’ desire for “change in leadership” that had prompted them to brave the polls last May 10, despite the hardships they had to endure in the process. She also praised EILER, Inc. (Ecumenical Institute for Labor Education and Research), WAC (Workers’ Alliance in Cavite) and CBBRC (Crispin B. Beltran Resource Center), along with unionists from KMU (Kilusang Mayo Uno) and partylist group AnakPawis, who “for too long have put forward proposals and demands so workers could enjoy their rights.” 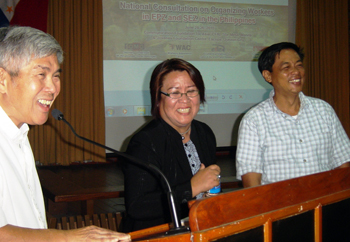 De Lima also reiterated the “deep respect, admiration and support” the CHR holds for these trade union groups and institutions who “continue to draw the true plight of Filipino workers.”

“For too long, the rights of workers, laborers and employees have been trampled upon because of the economic interests of a few,” said De Lima, who calls this “unacceptable.” She admitted that the country’s record of respecting trade union rights is in a “dismal, dispiriting state.”

As another administration replaces the old one, De Lima asked the question in many expectant people’s mind: “Will they (the new government) truly respect the rights of labor, or make appropriate speeches or pronouncements but turn a blind eye or worse, even be complicit, in the trampling of their rights?”

Vigilance remains to be the order of the day, said de Lima. Trade unionists, labor institutions and the rest of “civil society” will have to continue to work to make sure winning candidates keep the promises they made while on the campaign trail, to “prioritize rule of law, end to impunity, respect human rights especially rights of workers who have long borne the brunt” of a lopsided economy.

“You do not lose your right to organize or freedom to associate simply because you work in an export processing zone,” de Lima said in reaction to “so-called unofficial rules as no-union, no-strike” in economic enclaves.

She adds that “social justice doesn’t mean a thing” if there is such a thing as such unofficial rules, and that it is “no way to grow an economy, or to chart a course toward prosperity.”

Human rights of workers are paramount, she said, adding that an end to these rights violations must be found.

De Lima finds it “ironic” that labor rights activism is “not high on CSR (corporate social responsibility) agenda,” when one of the most obvious targets of CSR is protecting trade union rights. She also said that the CSR’s aim of “giving back to the community” can also be served by raising the workers’ wages every time.

About the persistent calls of labor to end the criminalization of labor cases and filing of trumped-up charges against labor activists, which exert a heavy toll on their time and resources, de Lima said that as the incoming justice secretary she can very well study and propose to do that.

Although she has “mixed feelings” about her new job, de Lima welcomes it as she can do more concrete things in the DOJ, whereas in the CHR, she is just “barking and barking.” That has been frustrating, she said.

Reacting to labor complaints about many labor leaders and activists languishing in prison today for patently trumped-up charges, de Lima vowed she would look closely into their cases.