MANILA — Two unions representing most Philippine Airlines employees vowed to press for their right to strike if PAL management continued with what they call as its anti-worker policies. But given the announcement of PAL president Jaime Bautista that he is confident no strike would occur because the labor department would likely assume jurisdiction of the case, the cabin crew union represented by FASAP asked the government to “play fair.”

“If you can tie our hands with an AJ (assumption of jurisdiction), please tie the hands, too, of the PAL management with regard to their discrimination and violations of the Labor Code,” said Robert Anduiza, FASAP president, in a media briefing this week.

Aside from violating provisions of the Labor Code from minimum wages to equal treatment of male and female employees, FASAP listed pertinent Constitutional provisions, international treaties, and the recently enacted Magna Carta of Women, as some of the laws being violated by PAL. 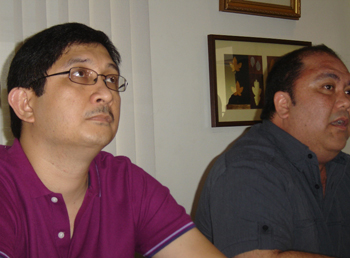 Finding supporters from diverse labor groups and people’s organizations, FASAP noted that over the years, AJ has been used “to let employers get away with violating the rights of their employees.”

Reacting to PAL President Jaime Bautista’s call not to inconvenience the airline’s customers with a strike, Anduiza said they are willing to waive the “surprise factor” in their planned strike. This they would do, he said, despite the fact that the element of surprise makes a strike more effective, so the airline’s customers could make prior adjustments.

Anduiza is also referring to the fact that the labor dispute involving the ground employees at PAL has been under AJ since May this year. PALEA is resisting the planned spin-off, and the “midnight approval” of it by DOLE, of three PAL departments affecting the jobs of nearly 3,000 regular employees.

As labor disputes in PAL continue to simmer and questions on Lucio Tan’s business dealings in PAL surface, despite the reported ‘I Love Lucio’ circles in some media, two resolutions have been filed in Congress calling for an investigation on PAL. The Aquino government, however, still preferred to just “monitor” and keep a ‘hands-off policy.’

“Respect Our Right to Strike, Don’t Impose AJ Without Acting On The Injustices”

Beneath the issue of discrimination in FASAP and the spin-off in PALEA, the one thing the Lucio Tan Group has been trying its best to do is stifle the unions’ similar demands to finally ink a new collective bargaining agreement with PAL, with its attendant talks of just wage and benefit packages.

“Through the years FASAP has been trying to correct the discriminatory provisions in the CBA but PAL plays hardball to force the flight attendants to abandon its cause,” said the union.

Citing losses especially since 2008, right after it went out of rehabilitation, PAL has so far refused to act on the cabin crew’s request to “rectify the discriminatory and outdated policies” in their CBA.

“We have been seeking to erase that discrimination since two CBAs ago,” said Robert Anduiza, union president. Each time, he said the PAL management would use the issue of their wages to force them to wrap up the CBA with the questionable retirement age still in it.

They expressed willingness “to scale down movements in the economic provisions of the CBA in order to allow PAL to save money,” in return for the abolition of the “unreasonable compulsory retirement age.” Despite this, FASAP lamented that PAL still refused to budge, and did not even give any counterproposal, except to ask them “What’s the rush?” and urged them to talk about the contentious retirement age in the next CBA, again.