MANILA – The widely opposed 277-percent increase in toll fees in Southern Luzon Expressway (SLEX), along with the imposition of VAT on toll fees— both set for implementation this Monday— were halted temporarily by the Supreme Court.

With the temporary restraining order (TRO) issued last Friday, the Supreme Court enjoined the government from imposing beginning August 16 the 12-percent value added tax on toll fees in the NLEX and SLEX and other toll ways. It issued another TRO against the implementation of the 277-percent increase in toll fees at the SLEX.

These TROs were issued to prevent irreparable damage to motorists while the High Court is deliberating on the legality of the increases, said SC spokesman Jose Midas Marquez. He added that the Court believes that if it would not issue a TRO, “it would be very difficult to refund motorists the additional fees collected if the Court later on decides against the VAT on the toll fees.”

Because of the TRO, the planned protests set on Aug 16 by drivers’ confederation Piston would likely be cancelled, said George San Mateo, secretary general of Piston,. “But we would push through with the protest actions once the TRO lapses, and the government resumes its plan to implement VAT on toll fees plus hikes in SLEX toll fees. We would continue protesting until the proposed hikes are permanently scrapped,” San Mateo told Bulatlat. 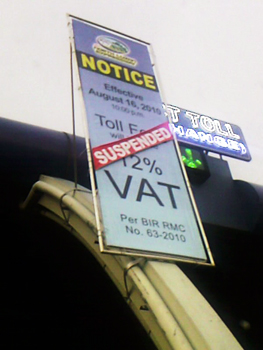 “We would closely observe the actions and pronouncements of TRB (Toll Regulatory Board), BIR (Bureau of Internal Revenue) and Malacañang,” said Steve Ranjo, chairman of Piston. The drivers’ group believes the government may try to find other ways to ram the increases down the motorists’ throat.

Before the Supreme Court issued the TRO, Piston (United Alliance of Associations of Drivers and Operators Nationwide) held a series of protests to air their criticisms of the proposed VAT on toll and proposed hike. San Mateo said implementing e-vat and toll fee hike would hit like a double whammy the public utility vehicle drivers who are often left with little to nothing for their family needs after a long day at work.

Bong Baylon, secretary general of Piston-National Capital Region, said that “To earn, a jeepney driver has to ply his route 12 times a day. With the government’s planned increase, he would have to pay up to P480 (US$10.67) in toll alone per working day. If the driver doesn’t own the jeep he’s driving, he would have to give P800 (US$17.78) of his earnings to the operator on top of the P480 he paid as toll fee, plus the gas that he used up while driving.”

San Mateo said the proposed hike in toll fees in SLEX resulted from the privatization of public infrastructures. In the south of Manila alone San Mateo said there are numerous toll operators: SLEX (South Luzon Expressway) from Nichols to Alabang is owned by Skyway Corporation; from Alabang to Calamba by the Southern Luzon Tollways Corporations and from Batangas to Batangas City by the Southern Tagalog Arterial Road (Star) Toll.

“Because the government said they did not have enough funds to continue developing these projects, they passed it on to private and foreign investors,” San Mateo said.