On a roller coaster ride in their struggle for the land they till, victory seems to be within grasp for the farm workers of Hacienda Luisita after the mediation panel announced that the land should be distributed, effectively revoking the Stock Distribution Option being imposed by the Cojuangco clan.

MANILA — On Sept. 14, the mediation panel created by the Supreme Court to resolve the Hacienda Luisita dispute announced that the 4,100 of the total 6,453 hectares of the sugar plantation should be distributed to the farmer beneficiaries.

The mediation panel also ruled that President Benigno S. Aquino III and his family, owners of Hacienda Luisita, would be given “just compensation.”

“This is an initial victory for the farmers,” Jobert Pahilga, legal counsel of Alyansa ng Magbubukid sa Hacienda Luisita (Ambala) and executive trustee of the Sentro para sa Tunay na Repormang Agraryo, said, adding that they are happy with the high court’s seemingly 180 degree turn from its previous pronouncement. Earlier, the mediation panel suggested another referendum to resolve the agrarian dispute.

Farm workers were happy with the news but said they would remain vigilant.

Pahilga said the mediation panel would be meeting on Monday, Sept. 20, this time together with the Landbank of the Philippines, to discuss the basis for the land valuation. The Hacienda Luisita Inc. (HLI) management said during Tuesday’s hearing that they are expecting no less than P1 million ($22,655) per hectare. 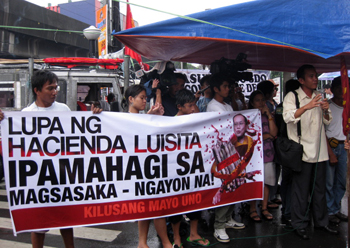 “It is now up to the government to haggle with the (HLI) management,” Pahilga said, “But while they are in the process of haggling, the lands should be distributed to its respective owners so they can start cultivating the land.”

United Luisita Workers’ Union acting president Lito Bais said they would be very vigilant and and would be monitoring the process of haggling between the government and the Cojuangco-Aquinos just in case they would not arrive at an agreement on the value of the land.

“At such rate, we would be at the losing end,” Bais said. He added that they would not be complacent on this matter because it might be one of the Cojuangco’s bait to hoodwink the farmer beneficiaries all over again.

“We clapped our hands as soon as we understood where the discussion of the mediation hearing was headed to,” Ambala presient Felix Nacpil said. Later on, he said, he could not help but doubt the intentions of the Cojuangco family as they appear to be finally letting go of the land they held on desperately for more than 50 years.

“What are they planning?” he asked.

On the other hand, Bais said most of the farm workers of Hacienda Luisita are already losing trust on the Cojuangco-Aquinos. He said the farm workers have seen for themselves that they would live a better life if they own even a small parcel of land instead of working for HLI.

To evade land distribution, the Cojuangco-Aquinos implemented the SDO in 1989 as one of the non-land transfer schemes indicated under the Comprehensive Agrarian Reform Law (CARL).

Nacpil said the atmosphere last Tuesday was the same when Ricardo Ramos, union president of Central Azucarera de Tarlac Labor Union (CATLU), won a case against the Cojuangcos. On October 25, 2006, Ramos was shot dead while celebrating the victory of the labor dispute with the HLI management.

Nacpil said he does not want anymore blood to be shed in their struggle for the land. Bais said they are taking all necessary precautions because, based on their experience in Hacienda Luisita, “every victory for the peasants is paid for with the death of a peasant leader.”

Bais said they would still continue calling for the revocation of the SDO, even if the lands of Hacienda Luisita would be distributed through the mediation panel. “If ever we would be emancipated from the shackles of the SDO, we still need to help other peasants who are likewise being denied the land they till through the SDO. (Bulatlat.com)