Luisita Farmers Walk Out of Mediation Hearing, Urge SC to Rule on Case

When the lawyers of the Cojuangco family said, during the September 14 hearing, that they are open to land distribution if the price is right, the farm workers finally became hopeful. However, the Cojuangco clan denied it the very next day.

United Luisita Workers’ Union acting president and Alyansa ng mga Manggagawang Bukid sa Asyenda Luisita vice chair, Lito Bais said that in a news report dated September 15, which was published in a major daily, the Cojuanco-Aquino clan was quoted as saying that they are not open to the distribution of the 4,100 hectares of land.

“So there is no more use continuing with the mediation process because there is no way that the farm workers would agree to the stock distribution option (SDO). We would rather that the Supreme Court decides the case based on its merits,” Bais said. 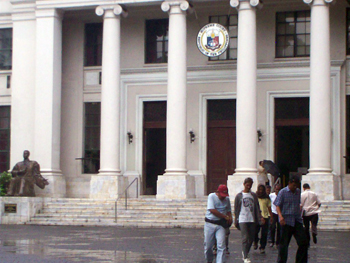 Lito Bais (with red cap) and seven other peasant leaders from Hacienda Luisita walked out from mediation hearing at around 10:30 a.m. on Monday, Sept. 20. (Photo by Janess Ann J. Ellao / bulatlat.com)

Bais wanted to speak before the panel to explain their withdrawal from the mediation hearings. The panel, however, denied their petition. “That is why we walked out,” Bais told Bulatlat, “They clearly did not want to hear what we have to say.”

Hacienda Luisita farm workers have already expressed their reservations on the mediation proceedings when it was suggested by the Supreme Court during the August 24 oral arguments.

In an earlier interview with Pahilga, he told Bulatlat that they only agreed to join the mediation because it is a call to lawyers to try to resolve a case amicably. He also said before that they would be participating in the mediation hearings granting that the discussions would revolve around the process of physical land distribution, which is not negotiable to his clients, the farm workers of Hacienda Luisita. “We do not want an agreement that sides with the Cojuangco family.”

During the first mediation hearing on September 8, Pahilga said, one of the justices suggested right away to implement a reformed SDO, believing that it only failed because of poor implementation. Sentra immediately filed a manifestation before the Supreme Court asking it to discontinue and terminate the mediation hearings and to rule on the case based on the merits.

“The subject matter of the case – the validity of the stock distribution option – is one that could not be resolved my mediation or by agreement of the parties,” their manifesto read.

On September 9, another justice proposed the holding of another referendum to make the farmers choose between physical land distribution either individually or to a cooperative and the SDO. Baid said the fact that the SDO is among the choices in the referendum would only pave the way for its legality.

The peasants were already planning to walk out from the hearing on September 14 when the HLI lawyers said they are open to physical land distribution if the price is right.

The mediation hearings would continue despite the withdrawal of Ambala and Ulwu, which comprises about 4,300 farmers or about 72 percent of the total farm worker beneficiaries in Hacienda Luisita. In fact, the mediation panel still met with the representatives from the Landbank of the Philippines and the remaining parties to discuss land valuation.

“They were not yet able to decide on the land valuation,” Pahilga said, adding that the mediation panel is seemingly still entertaining the idea of holding a referendum as suggested earlier.

HLI spokesperson Antonio Ligon said in a GMANews.TV report the Ambala’s walk out would “negatively affect the ongoing mediation proceedings.” He also denied they are demanding for P1 million($22,655) per hectare payment from the government.

Pahilga would be submitting a formal manifestation before the Supreme Court excusing themselves from the mediation hearings. Bais, on the other hand, said they would remain vigilant and would watch over the next moves of the Cojuanco family. (Bulatlat.com)