“It’s amazing to see how strong you are despite everything that had happened to you…It’s fantastic. I am moved and it has given me more encouragement to take your case,” Michael Gooding, a lawyer from United Kingdom, told the Morong 43.

MANILA — They came to express their solidarity with the Morong 43, but were instead inspired and moved by the militancy of the detained health workers.

The 43 health workers were arrested by 300 combined elements of the police and military on Feb. 6 in Morong, Rizal while conducting a health skills training. The Morong 43 were held in military captivity at the Camp Capinpin for almost three months before they were transferred to a regular detention facility at Camp Bagong Diwa.

The 15 lawyers, meanwhile, were delegates to the recently concluded Fifth Conference of Lawyers in Asia and the Pacific (Colap V) held in Manila.

“We are here to send solidarity greetings from almost 300 lawyers. The whole world is now watching your case,” Jeanne Mirer, president of the International Association of Democratic Lawyers (IADL) told the Morong 43 detainees. Delegates of the Colap V unanimously adopted a resolution calling for the immediate release and dropping of charges against the Morong 43. 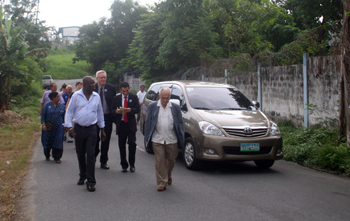 On Sept. 15, the IADL officers and members held a dialogue with Justice Secretary Leila de Lima. De Lima vowed to review the case of the Morong 43.

The lawyers met the male detainees at a small chapel inside the high-risk detention facility at Camp Bagong Diwa. Later, they went to see the female detainees at the receiving area which also serves as the kitchen of the prison cells.

Dr. Julie Caguiat, spokeswoman of the Free the 43 Health Workers! Alliance, narrated the human rights violations committed against the Morong 43.

Gary Liberal, a registered nurse and one of the detainees, said their regular sunning has been suspended or three months. Some—the aged and ill—were allowed to get sun exposure, only once. The male detainees are obviously pale.

Jo Dereymaeker, a lawyer from Belgium who was able to visit the cell of the female detainees, said the place is not fit to live in. The cell can only accommodate 12 individuals. Twenty-two women detainees, excluding Carina Judilyn Oliveros who has been under hospital arrest, are cramped up inside the cell which measures ten meters by six meters.

Oliveros gave birth to her first child at the Philippine General Hospital (PGH) in July. After three weeks, she was sent back to jail with her son. After a few days, a court order was issued allowing her to breastfeed her child at the PGH for three months.

Ventilation is not so good. At the female detention facility, small holes in the wall along the hallway serve as windows.

Asked about their hygiene, Dr. Merry Mia-Clamor said there is a problem with the sewerage. There is one toilet for the 22 women detainees. The septic tank has been overflowing and they had to clean up the feces the whole day the other week.

Only P50 (approximately a dollar) is allotted for the food of every prisoner per day.

Angela Doloricon, one of the Morong 43, said since they held a noise barrage to protest the court order sending Oliveros and her newborn son to jail, raw vegetables, fruit and other uncooked food have been banned from being brought inside the jail.

Franco Romeroso, one of the Morong 43 from Cavite province, said medicines donated by Bishop Broderick Pabillo have been held by the jail guards at the infirmary. Bishop Pabillo visited the Morong 43 on Sept. 19.