Badion said the hands of the Quezon City local government are tinted with blood. “Mayor Herbert Bautista and Vice Mayor Joy Belmonte, who are both allies of Aquino, have been neglecting their own people as they did not send a single representative during the demolition.”

Bautista said in a report that the informal settlers were warned about the impending demolition, adding that they were already given houses and lots at the relocation site. He said the people are insisting that a medium rise building be constructed for them. 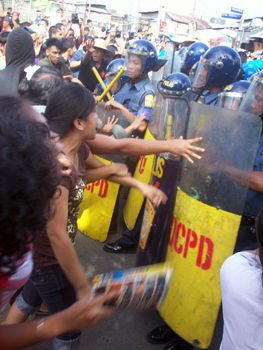 “The bidders won. I cannot discount the efforts of NHA because they gave them a relocation site. It is just a kilometer away from the hospital; a daycare center is already under construction,;it has a school and the facilities are complete.”

Vice president and Housing and Urban Development Coordinating Council chair Jejomar Binay, on the other hand, was reportedly going to arrive at around lunch time. Kadamay said the HUDCC could have put a stop to the demolition as early as the planning stage.

“Yet he chose to visit us when the demolition has already started and many were hurt?” Badion said, adding that it might be just another “papogi” (to make himself look good) stance for Binay.

The demolition team started to leave at around 3:00 p.m. But the residents stayed and continued with their vigil along EDSA and in Agham Road, vigilant for a “surprise attack.” 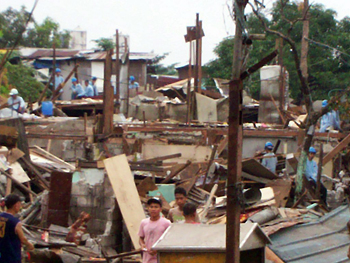 Bea Arellano of Kadamay said they would continue to guard their homes from possible threats of demolition. “Social justice waves the way for the straight path (referring to Aquino’s tagline during the campaign). This is why the urban poor should get what is due to them.”

“We will fight for our rights,” Arellano said. In the meantime, the residents are waiting for the decision of the court and that of President Aquino when he arrives in the country. (Bulatlat.com)