You Are Here: Home → 2010 → October → 4 → Threat of Dengue Outbreaks in Philippines Remains Amid Tepid Government Response

The Department of Health should not merely focus on educating the people about cleanliness, said Dr. Gene Nisperos, vice-president of Health Alliance for Democracy (HEAD). The government should also act decisively on deforestation, urban planning (which includes genuine mass housing and an up-to-par drainage and sewerage system), on top of giving public health subsidies.

MANILA– Known as “break-bone fever” because it can be extremely painful, dengue is an illness and now a perennial health problem brought about by a mosquito bite. It is prevalent in tropical countries such as the Philippines. Populous areas are more easily prone to dengue although it poses the same danger for both urban and rural dwellers, said the non-government Council for Health and Development (CHD) in its latest health bulletin.

Anyone can fall ill with dengue anytime during the year but the number of patients noticeably increased much more rapidly during the rainy season. This may be explained by the fact that the dengue-carrying mosquito called Aedes aegypti, which has black with white spots and active during daytime, breeds in stagnant pools of water.

These mosquitoes used to inhabit forested areas, but increased deforestation, according to botanists, has driven them to populated villages. In the metropolis where the drainage system had been found obsolete since 1977, the draining capacity of which, according to an urban planner, is down to a mere 25-percent, the mosquitoes apparently have ample breeding areas when it rains. The Aedes aegypti mosquito lives only for two days to four weeks, but the eggs it lays can survive up to a year and hatch whenever the climate is favourable to it.

The Department of Health should not merely focus on educating the people about cleanliness, said Dr. Gene Nisperos, vice-president of Health Alliance for Democracy (HEAD). The people also prefer cleaner surroundings but the government has to act decisively about deforestation, urban planning (which includes genuine mass housing and an up-to-par drainage and sewerage system) on top of giving public health subsidies, according to progressive health, environmentalist and women’s groups.

Dengue is worse for the poor majority of Filipinos, said Dr Nisperos. Owing to joblessness, lack of sanitation in jam-packed communities, lack of access to clean water and mass housing, the poor are more vulnerable to dengue. They also do not get proper nutrition, if they manage to eat three square meals at all. They live in areas that are vulnerable to disasters and epidemics, not to mention violent demolitions and threats of eviction. “The houses of the poor often do not have screens that can ward off mosquitoes,” said Dr Nisperos.

While it is true that everyone could be bitten by the dengue-carrying mosquito, the poor stand to suffer more because poverty has forced them to live with these dangerous mosquitoes, and hunger hardly prepare their bodies for resisting diseases. The almost non-existent heath services for the poor further makes them vulnerable, added Dr. Nisperos. 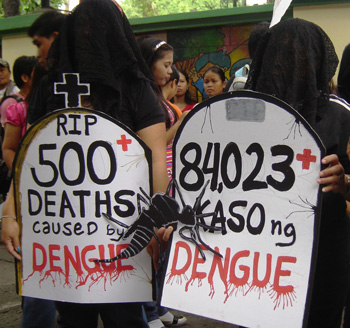 The treatment for dengue in a public hospital costs at least P7,000 ($160), and the patient has to wait in line for a long, dangerous time, said Dr Eleanor Jara of CHD. Although public hospitals are relatively cheaper, these are understaffed and ill-equipped.

So far there is no definite cure yet for dengue. Instead, what are being treated in dengue patients are only its symptoms. The patients’ vital signs are being monitored to prevent dehydration and blood tests are being administered often to monitor the blood platelet count. Some have to undergo blood transfusion, which is costly, if the platelet count has gone down to a life-threatening level. In time, the dengue patient gets better, under the close supervision and treatment of symptoms, with adequate rest. Some patients, said the CHD, may be given antibiotics to prevent other infections. There is no vaccine against dengue but there are studies and experiments to develop one.

At present, the reported dengue cases alone have more than breached the 80,000 mark, which was the health department’s worst-case scenario early this year. As of September 11, some 84,023 Filipinos have fallen ill of dengue, a 118-percent increase from last year’s, and these are just the reported diagnosed cases.

Sadly, more than 500 have died due to dengue from January to September this year.

Dengue Hemorrhagic Fever (DHF) is the worst kind of dengue infection. As described in the CHD bulletin, the DHF-afflicted patient can suffer from serious bleeding. Research shows that DHF results when a patient contracted more than one of the four viruses carrying dengue. The body could experience shock or convulsion due to lack of blood, in a condition called “dengue shock syndrome.”