The public and government officials, among them President Aquino, always blame drivers each time a deadly bus accident happens. What they don’t know — or chose to ignore– is that bus drivers and conductors are working under severe conditions imposed by greedy operators and ignored by government regulators, thus allowing these mishaps to happen in the first place.

Sidebar: For Provincial Buses, Physical Condition of Drivers — and Their Buses — Are Key to Safe Travel

MANILA — When a bus plunged into a ravine in Benguet province in August, killing 42 people, its bus driver was immediately blamed and condemned even in the absence of an investigation. In that accident in Benguet — and even the one that same month in Bicol where a beauty queen died and last year in Metro Manila where a young girl was killed – bus drivers were immediately accused of being drug addicts, reckless and unruly.

In Metro Manila, where more than 6,000 passenger buses ply the roads, 10 bus accidents occurred every day last year, according to the Metro Manila Development Authority (MMDA). At least one in 10 incidents resulted in deaths or injuries, while most resulted in damaged vehicles.

The MMDA, and practically everybody else, easily heaped the blame on drivers, urging them to have discipline while other government agencies were quick to prescribe random drug testing of drivers.

According to report released recently by the Philippine National Police, the traffic accidents from 2001 to 2006 were caused mainly by driver’s errors (26 to 28 percent), mechanical defect (12 percent), overspeeding (18 percent), damaged roads (5%).

Another study, citing a 2003 partnership between Asian Development Bank and the Association of Southeast Nation (Asean) that created a “road safety country report,” claimed that as much as 61 percent of total investigated traffic accidents in the Philippines in 2001 were due to driver’s errors.

Even President Benigno S. Aquino III couldn’t resist joining the mob. While investigations were still being done on the cause of the Benguet accident, he dismissed as a “lame excuse” the driver’s claim of a brake failure.

It is an accusation that doesn’t sit well with Sandy Hachoso, 40, a bus conductor who is also president of the Kabisig Bus Transport Workers Alliance, based in Manila.

It is convenient for the government to quickly pin the blame on drivers, Hachoso said, but real solutions to problems concerning transport safety would continue to elude the country if the government persists on just demonizing the drivers while the sector remains “too deregulated,” Hachoso told Bulatlat in an interview.

Hachoso said President Aquino, who earlier called for a review of the factors causing these accidents, had ignored a “very vital issue” that affects the safety concerns of the industry: the working condition of the drivers. 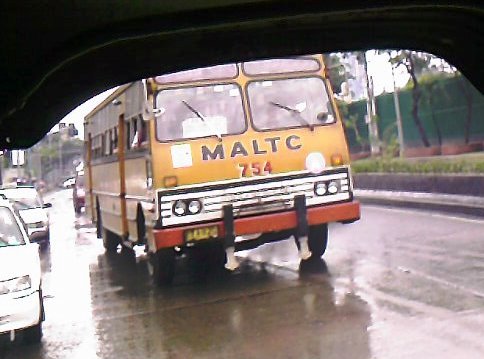 An old bus plying one of the Metro Manila routes. (Photo by Marya Salamat / bulatlat.com)

Because of the largely privatized system of running the country’s public transport, especially the relatively more capital-intensive bus sector, bus operators are given much leeway in how they treat their drivers, conductors and mechanics. Based on practices in their sector, Hachoso said, “it would seem like the public transport sector is not covered by the Labor Code.”

All bus drivers and conductors plying Metro Manila alone neither have basic daily wages nor an eight-hour working day. A big majority earn on commission basis while a few earn from what is left of a day’s so-called “boundary,” or the drivers rental of the vehicle. Operators also impose “high quotas” of earnings on newer buses, forcing drivers and conductors to work longer hours just to meet this quota.

Citing a survey of their members’ plight, Hachoso said that usually, only the older, dilapidated bus units go on a “boundary system.” Operators use the commission basis for newer buses. But the commission or the amount of “boundary” is determined solely by the operators, who in turn are motivated principally by profit, Hachoso said.

At present, drivers get on average nine percent of the daily earnings from the bus while the conductor gets seven percent.

The drivers and conductors take out from their own pockets the “illegal exactions” or “tong,” bribes and fines imposed by corrupt MMDA personnel or traffic enforcers of local governments. They also shoulder whatever “terminal fees” they have to pay.

Whenever the bus lines’ operating costs increased, as when toll fees or prices of crude increased, the operators tended to cut its employees’ earnings to keep its profit, Hachoso said. Setting higher fares to compensate for the increased costs usually needs government approval, but slashing the commissions of bus employees is the sole discretion of bus operators. In 2008, for instance, bus operators met with employees to announce a memo reducing the drivers’ and conductors’ commissions due to the increasing prices of crude.