PAL Workers Wonder if Aquino Is Really Concerned About Their Plight

It Ain’t Over Till It’s Over

PALEA’s 10-year CBA moratorium has lapsed, but it is nearly three years already and they still have no new collective bargaining agreement.

The more recent almost two-year delay in their CBA was reportedly brokered by Edgardo Oredina, PALEA’s recent past president, who led in deciding to extend their CBA moratorium by another year after the first 10-year moratorium had lapsed. He has been awarded a seat in PAL’s board of directors, much like another former union president, Alex Barrientos, who had agreed to the 10-year CBA suspension under questionable circumstances.

Today the delay in PALEA’s CBA continues as workers grapple with the threat of mass layoff.

Even as they are holding a big rally in Ayala, papers detailing the DOLE-decided separation offers are reportedly being handed out to PAL workers, asking them to sign their agreement. PALEA itself had released a circular to members discussing or sharing the DOLE-decided offers in detail. 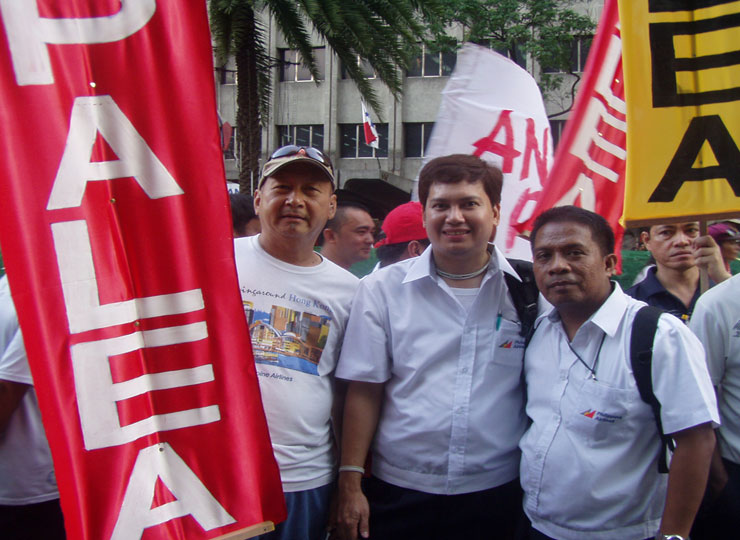 Despite the alleged sell-out of at least two past union presidents, PAL ground crew workers still prefer to remain part of a union and a regular workforce with job security. Most of the workers from the affected departments interviewed by Bulatlat.com also said they would fight the threat of layoff and contractualization.

Robert del Rosario, 40, a PAL employee who has been working at the inflight catering department for 19 years now, said they have learned from the lesson of their 100 fellow workers in the department.

Like today, del Rosario said that some 100 regular, unionized co-workers had been inveigled to transfer in 1998 to the then newly opened catering department of Lucio Tan Group’s MacroAsia. “They were okay there at first. But in time, and because they don’t have a union, they can be fired with a mere flick of a finger.” 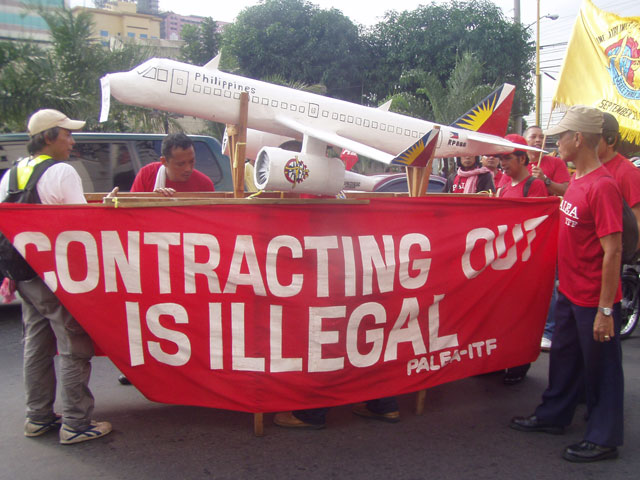 PAL posted a net income of $28.2 million from July to September this year; its revenue also grew by 33 percent to 399.5 million.(Photo by Angelica G. de Lara / bulatlat.com)

The fight in PAL is now “beyond PALEA,” the union said. “In factories, shops, offices and malls, contractual workers are working side-by-side with regular employees in doing the same job for lesser pay and worse working conditions.”

PALEA demands that government “institute reforms to enhance job security and stop contractualization schemes.” The Kilusang Mayo Uno urged workers to unite in demanding to scrap the Herrera Law, which has legally paved the way for contractualization and vested the labor secretary with powers to craft regulations that guide companies in implementing “legal” contractualization and labor-only-contracting. (Bulatlat.com)