The caravans and rallies raised calls for “legislated, substantial” pay hikes— a P125 ($2.8) legislated minimum wage hike nationwide for private sector workers and a P6,000 ($136) minimum pay hike for government workers— and an end to the seemingly “government policy” of contractualization of jobs, which slash the workers’ wages even lower.

The Southern Tagalog “Caravan for Substantial Wage Hike” led by the Kilusang Mayo Uno (KMU) started the day early with a rally in front of the Nestlé plant in Cabuyao, Laguna. This is the core factory in Asia of the world’s largest food company.

Nestlé Philippines has figured in a bloody breakup of the strike of its 600-strong United Filipro Employees (UFE) nine years ago. The union has appealed to President Benigno Noynoy Aquino to urge Nestlé to abide by the Supreme Court decisions on their case, but after months of fruitless following up with the office of the president and talking with the labor department, the union said Nestlé still flouts the law up to this day.

“It is evident that it is the capitalists, landlords that Noynoy really serves… they are Noynoy’s real boss!” said Noel Alemania, UFE’s acting president, as they pointed to President Aquino laying the ceremonial time capsule in the groundbreaking ceremony of Nestlé’s fifth manufacturing facility in the Philippines last Nov 23, while their labor case gathers dust in government offices.

Nestlé management has reportedly increased the number of its lower-paid contractual workers after it laid off its striking employees.

In Southern Tagalog, workers complain that wage freeze and below minimum wage rates are rampant as an unwritten policy of the numerous eco-zones in the region.

From Cabuyao, Laguna, the “Caravan for Substantial Wage Hike” travelled for nearly three hours to reach the House of Representatives in Batasan, Quezon City, where Anakpawis Partylist Rep. Rafael Mariano met them.
Anakpawis Rep. Rafael Mariano has filed HB 375 calling for P125 ($2.8) daily minimum wage hike nationwide. In a brief program, the workers called on the rest of the country’s legislators to “prioritize the legislation of HB 375.”

“Given the continuous rise in prices of petroleum products and basic goods, only the workers’ wages have remained frozen at the lowest levels,” said Hermie Marasigan, spokesperson of KMU-Southern Tagalog. “It is only just and timely especially this Christmas season to increase the workers’ wages.”

The caravan then drove to the foot of Mendiola Bridge near Malacañang to further dramatize their calls for substantial wage hike. 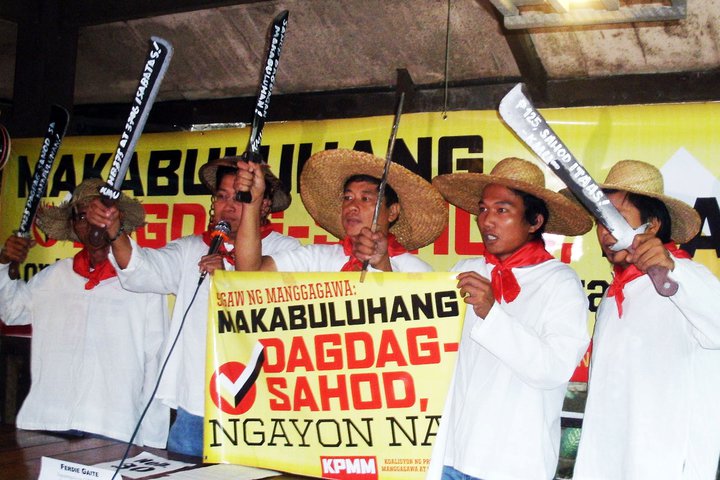 They timed their rally to coincide with the filing of House Bill 3746 to legislate a P6,000 ($136) increase in the minimum pay of all government employees. The bill is sponsored by Anakpawis Rep. Rafael Mariano, Gabriela Women’s Partylist Rep. Emmi de Jesus, ACT Teachers Partylist Rep. Antonio Tinio and Kabataan Partylist Rep. Raymond Palatino.