MANILA — Students from state universities and colleges (SUCs) stand firm that budget cuts are no ‘ghosts.’ But if by ghost, Sen. Franklin Drilon and Vicente Sotto III means an “evil monster,” Kilos na Laban sa Budget Cut, an alliance of students from state schools, said then they would agree that these ghosts are for real.

“How could they deny the budget cuts when it was the president himself who first broke the news, not the Kabataan Party or any student group,” Kabataan Rep. Raymond Palatino said during the December 1 protest action of SUC students in front of the Senate. They were referring to President Benigno S. Aquino III’s budget message dated August 24 where he said the government would be “gradually reducing the subsidy to SUCs to push them toward becoming self-sufficient and financially independent.” 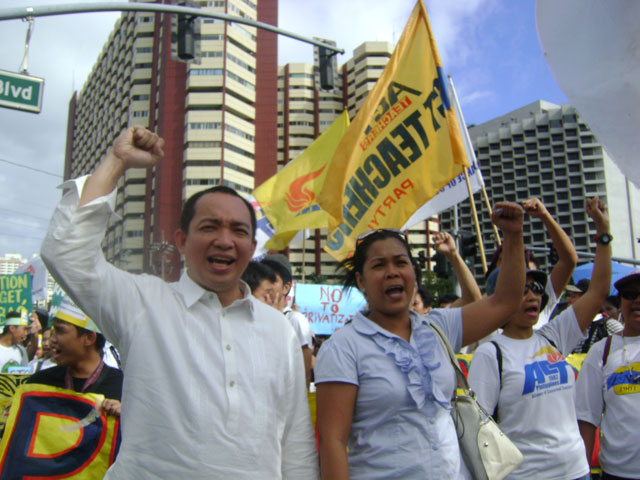 The Aquino administration has been criticized by youth and student groups for the massive slashing of the budget of SUCs amounting to P1.1 billion ($24.5 million at an exchange rate of $1 = P44.83). The largest group of students that gathered against the budget cut was on December 1, when thousands of students trooped to the Senate, which was then deliberating the proposed 2011 budget.

“We will not be cowed. We have a duty to our nation and we have a future to fight for,” Vencer Crisostomo, spokesperson of the Kilos Na Laban sa Budget Cut, said.

In a report, Budget Secretary Butch Abad denied that there would be budget cuts in SUCs in the proposed 2011 budget, adding that it is actually higher by P2.4 billion ($55.8 million) compared to last year. He added that there is an increase in the budget for personnel services because of the pending increase in teachers’ pay as mandated by the Salary Standardization Law 3, which was passed last Congress. 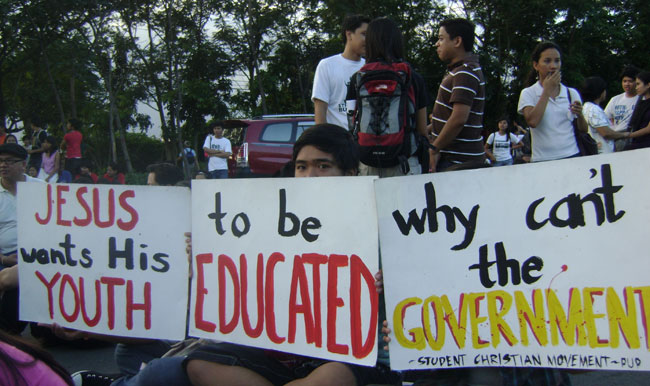 The budget cut, according to Abad, that is being referred to, is the cut from congressional insertions (CIs) worth P1 billion ($22.3 million) for maintenance and other operating expenses (MOOE) and P1.8 billion ($40.1 million) for capital outlay of SUCs.

Senators Vicente Sotto III and Franklin Drilon also supported Abad’s statement. Drilon said what was removed were the congressional insertions in the SUC budget that were ordered removed by former Pres. Gloria Macapagal-Arroyo in the 2010 National Expenditure Program because there were no sources of revenues for these. “It is hard to wake up a person who is already awake,” Drilon said, referring to those who do not believe that there is no budget cut.

“These additions to the budget should not have been cut and should have been restored and provided without conditions,” Kilos na Laban sa Budget Cut said in a statement. They belied, however, that it was only the congressional insertions that were cut from the SUC budget.

With or without the removal of the congressional insertions, Sen. Allan Peter Cayetano said, the budget for SUCs would remain lower than last year’s. He said these congressional insertions were mainly allotted for scholarships and capital outlay while it is the SUCs MOOE that has suffered greatly from the budget cut. The budget for MOOE in some universities, according to Kilos na Laban sa Budget Cut, has been reduced by more than 50 percent.

The student alliance against the budget cut, on the other hand, said the government should not take credit for the supposed increase in the education budget simply because it is complying with SSL 3, which was only passed last congress. They said it “has actually been offset by the huge cuts in MOOE and capital outlay,” which did not receive a single centavo from the 2011 budget.