Children Hold Rally for Peace Based On Justice

Yet, these children and their families were not activists at first, said the Center for Trade Union and Human Rights (CTUHR). Most of them were merely accused of being members or of harbouring New People’s Army (NPA) fighters. Sometimes it is also because their houses happen to be near or in the mountains itself where the military believes the NPA holds camp. 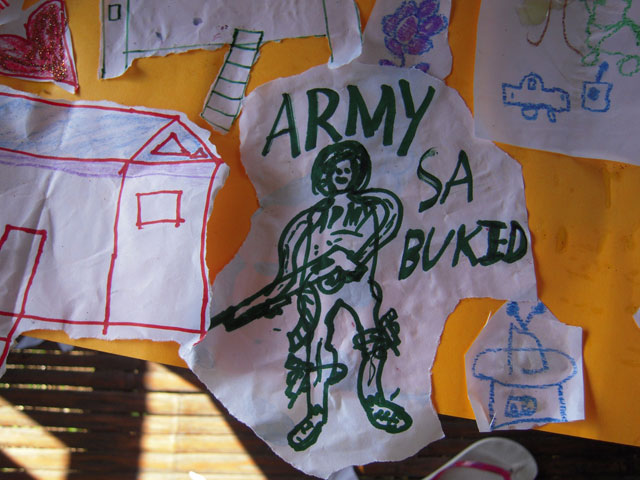 Children drew pictures of what they fear most. (Photo Courtesy of CTUHR / bulatlat.com)

“They have been driven away from their homes because of militarization,” explained Norman Tubera of CTUHR. He was one of the human rights advocates who facilitated a children’s workshop in Negros recently to try to help the children “release their emotions” and better cope psycho-socially with what has happened to them.

Most of the survivors of the killings in Negros say their murdered parent/s were only accused or mistaken of being NPA’s. According to the CRC-Negros and the CTUHR, the children appear and sound tough but there seem to be marked effects on their personalities. 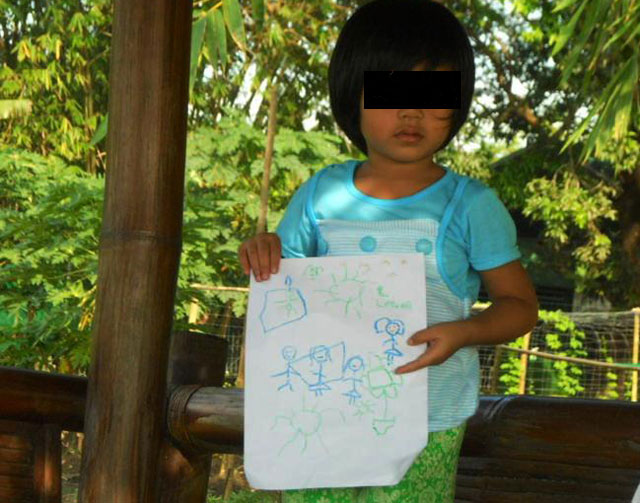 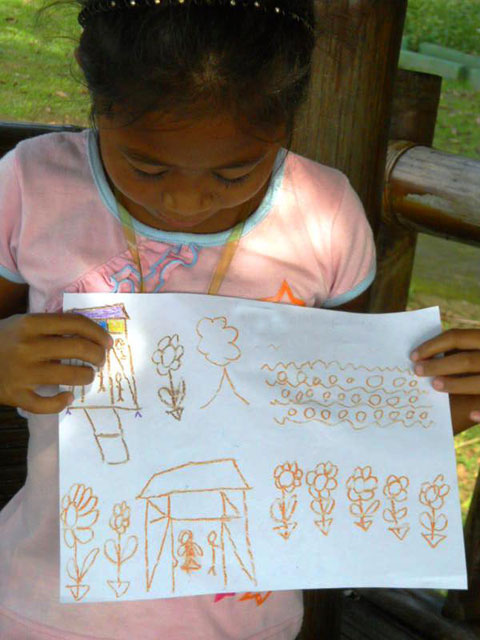 Children drew what they wished most- regaining their homes, their family, or their farms, all free of soldiers. (Photos Courtesy of CRC-Negros / bulatlat.com)

“Children here would tell you without flinching about how he or she or his or her friends no longer have a father because ‘he was taken by the military and was never returned,’ or that ‘his parents were gunned down,’” said Tubera.

A 30-year-old mother recounted how she had been forced to distribute her five children to different communities after the men in her family – her father and her husband – were killed by state soldiers.

Another mother told of how her family has fallen prey to state soldiers since the 80s, and that today, she is no longer afraid of hearing gunshots. What she fears more now is hunger, she reportedly told the CRC-Negros and CTUHR. This mother recalled how the soldiers had killed all their livestock, cooked some in their own house, which the soldiers later burned down, leaving them homeless and without food. 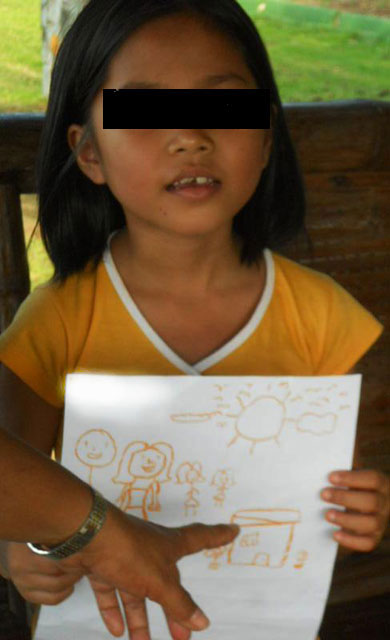 Amid the persistent militarization in Negros, this mother has seen only one of her children graduate from high school. This son, she said, was only 17 and a recent high school graduate when he was reportedly made to kneel in front of the soldiers and then they shot at him and killed him.

Two children, aged 11 and 13, witnessed the extra-judicial killing of Toto Quirante, a barangay council member, in Negros. According to the CRC-Negros, these two children told them their first impulse had been to help save Toto. It was their immediate thought even as 30 armed soldiers and CAFGUs surrounded the house they were staying in one night and shouted at them to bring out a certain person (a peasant organizer who has not gone home for a long time).

“Toto was shouting his name all the while, telling the gathered soldiers outside that he is not the person they wanted, that he is a barangay council member. But he was reportedly dragged out of the house all the same, with the two children vainly holding on to his hands,” Tubera quoted what the children-witnesses told them in the workshop.

Because it was dark at the time, the children said they couldn’t see clearly. But they could feel and hear that Toto was being badly beaten up. The children said the soldiers managed to drag Toto out of the house and out of their hands. Toto was holding on to the beams of the house’s porch when the soldiers shot him in the head, said the two children.

Instead of cowering in fear and trauma since that day, these two children have surprised the child rights advocates with their readiness in speaking out about the killing to the media and to investigators. When asked why, the two children reportedly explained: “We do not want this to happen again to other people.”

Extra-judicial killings seem to be changing the personalities or what are expected of children’s personalities at a certain age. The CRC-Negros and the CTUHR, for instance, have noted that a five-year old who has been orphaned and left to the care of his grandmother, appears too serious and mature for a child his age. He has learned to search for food when he and his grandmother have nothing more to eat. He goes out to catch frogs for food, for example.

“During the nine-year fascist rule of former president Arroyo, countless children were either direct or indirect victims of gross human rights violations,” Gabriela said in a statement. “Despite evidences that point to state elements as perpetrators, no suspect has been brought to justice.”

According to Gabriela, it was clear that a state policy of extra-judicial killing and other human rights violations was in place. Yet, Arroyo and her cohorts remain scot-free, Gabriela said. Worse, Aquino has defied the popular outcry and continued Arroyo’s counter-insurgency program, from which the fascist attacks against the people including children can be traced, Joms Salvador, Gabriela’s deputy secretary-general, said in the Children’s Solidarity Action.

“We were able to empower children to uphold and safeguard their rights themselves,” said Dipon, with their children’s solidarity action and workshops. She said that they hope “the president has the pluck to do the same.”