The long-delayed substantial wage hike demanded by Filipino workers found no room this Christmas in the House of Representatives. Meanwhile, prices of food and transport continue to soar, and even the ILO reported that the Filipinos’ wages suffered one of the biggest cuts in Asia.

MANILA – “It looks like our legislators were very excited in having their Christmas vacation,” said Ferdinand Gaite, co-convener of the alliance Koalisyon ng Progresibong Manggagawa at Mamamayan or KPMM. His group went to the gates of the House of Representatives on Wednesday to push for the approval of House Bill 375 which seeks to legislate a P125 ($2.82) across-the-board wage increase nationwide.

Filed by Anakpawis Rep. Rafael Mariano last July 1, the bill was supposed to be scheduled for deliberations by the House Committee on Labor and Employment that day, but it did not push through because the congressional sessions adjourned earlier than scheduled.

There were supposed to be two more working days at least before the Congress was to have adjourned for Christmas, Gaite said as his group pressed on with their planned brief program before the House of Representatives.

With Gaite were workers from the public and private sectors. They were carrying big signboards bearing the group’s demand for a P125 ($2.82) wage hike, as well as big and small Christmas lanterns. The workers’ visit to the gates of the House of Representatives was supposed to be their way of “sending their message of hope” to lawmakers for the passage of the wage hike bill.

But the workers were forced to swallow yet another disappointment. Last Wednesday’s scheduled deliberations would have been the first since the bill was last tackled by the House Committee on Labor last September 2008. 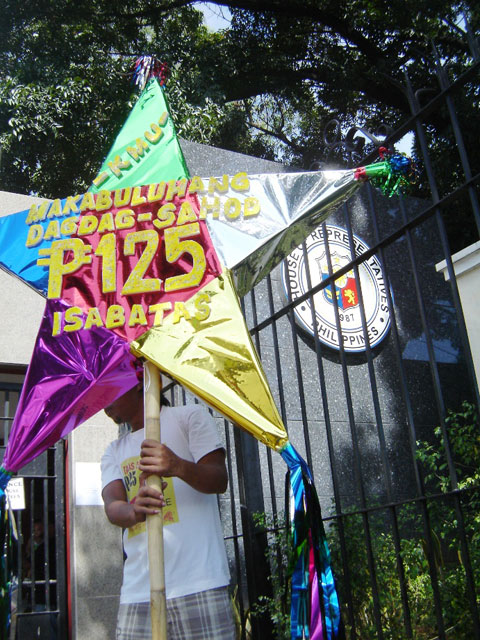 “The cancellation of the Dec. 15 committee hearing for a wage hike bill hits a raw nerve among Filipino workers and people who want the bill approved immediately. It shows that congressmen are insensitive to the plight of private sector workers. Instead of welcoming every opportunity to understand workers’ pressing calls for a wage hike, they just acted like they don’t care,” said Joselito Ustarez, vice-chairman of KMU.

“For so many years, the eminent labor leader Crispin ‘Ka Bel’ Beltran struggled to get a P125 ($2.82) wage hike bill approved by Congress and the government. It is a sad commentary on the type of government we have that Ka Bel died without seeing the fulfillment of this just and immediate call,” Gaite said.

Gaite explained that the previous P125 ($2.82) wage hike bills had been ignored by the past government of Gloria Macapagal-Arroyo. In the 13th Congress, the bill was passed on third and final reading but it was recalled and reverted to the committee. In the 14th Congress the P125 ($2.82) bill was tackled in a Committee hearing but was never pursued further.

“Previous bills for a substantial wage increase were junked under the Arroyo regime, with the net result that (the) workers did not receive any substantial wage increase throughout the previous nine years. The regional wage boards, the government’s mechanism for increasing wages, have proven to be utter failures in giving immediate and genuine relief to workers because they have been giving mere crumbs, as if to beggars,” Gaite said.

Even the recently released International Labor Organization’s Global Wage Report has affirmed what the progressive labor groups have been saying for years, the Kilusang Mayo Uno (KMU) said in a statement today. The ILO’s report said workers’ wages in the Philippines suffered one of the biggest cuts in Asia because of the global crisis. It said real wages in the country went down by four percent, indicating a further widening of the gap between workers’ productivity and their wages.

“The situation of our wages is in dire conflict with the holiday’s spirit of sharing,” said Ustarez. He explained that “big firms continue to get most of the share in the wealth created by our sweat, while we are left with crumbs in stagnant wages.”

Ustarez cited a Bureau of Labor and Employment Statistics report in 2008, when the P125 wage hike bill was last discussed in Congress. That year, the productivity of workers in the manufacturing sector was recorded as P566,169 ($12,763) while their average wages were only P83,393 ($1,880). According to KMU, this means that out of the wealth created by workers in exchange for such paltry wages, their employers got 579 percent more.

“A law calling for a substantial wage increase is the House of Representatives’ long-overdue debt to the Filipino workers and people. Legislators should take the opportunity presented by House Bill 375 to make up for the injustice of killing or neglecting the bill in its previous forms,” said Gaite.

They also called on President Benigno “Noynoy” Aquino to mobilize his allies in the Lower House to approve the said bill. “He should give a concrete and tangible form to his slogans of promised change and the people being ostensibly his boss,” Gaite said.

Lack of Social Justice in the Toiling Masses’ Nativity Scene

In a separate “rally for social justice” held a day later in Manila by various marginalized sectors allied with the Anakpawis Partylist group, the protesters pointed to the widening gap between the cost of living and the minimum wages in the country. From P257 ($5.79) in 2001, the gap this year has increased to P553 ($12.47), said Joel Maglunsod, spokesperson of Anakpawis Partylist.

The group echoed the assessment aired by KPMM and KMU that huge profits yearly accrue for big firms while workers continue to be denied decent wages. As workers struggled to extend the worth of their wages, the “Top ten firms in the country on the other hand more than doubled their income in ten years from P576 billion ($13.1billion) to P1.26 trillion ($29 billion), an amount equivalent to year-long salaries of 10 million minimum wage earners,” said Maglunsod.

Incorporating the wage hike demand aired by KPMM into a whole package of demands for social justice, including not just wage hikes but land reform as well, and jobs and democratic rights, Anakpawis Partylist members from workers, farmers, fisherfolk, drivers, and urban poor groups gathered in Manila to “assess” the Aquino administration. In the afternoon, they paraded to Mendiola a “nativity scene of the toiling masses to depict the dire state of the masses this Christmas as a result of the programs of the Aquino regime.”

“We feel the Christmas grinch this early in the form of price hikes in LPG, rice, bread, sugar, and other basic needs. The new year could be marked by skyrocketing prices in train fares, expressway tolls, and oil prices,” Gaite warned.

Despite their disappointment with Congress and the new administration of Noynoy Aquino, the public-private sector labor groups and the marginalized sectors said they “fully anticipate the coming new year to bring a new hope for the passage of a substantial wage hike bill,” as they vow to intensify their efforts to push for the passage of the P125 ($2.82) wage hike bill.

“This Christmas,” Maglunsod said, “we can only fill ourselves with the spirit of hope that the rights of the marginalized will be realized through our persistent collective action.”