Meanwhile, Deejay and Neil were faithful to their Katipunan team. Costumes rented out from the Philippine Educational Theater Association (Peta) served as their wedding attire — kimona and saya (skirt) for Deejay and camisa de chino for Neil.

Instead of the traditional lineup in the entourage, Deejay and Neil marched together with their parents to the music of Bonifacio’s “Aling Pag-ibig Pa” sung by Walkie Mirana with Bayan’s Renato Reyes Jr. on the guitar.

“Neil said he didn’t like the image of ‘giving away the bride’ so to speak so we decided to march together with our parents who have been supportive of our relationship and of our cause,” Deejay said.

The couple was barefoot when they marched to the altar. “That is a symbol of our solidarity with the peasants and the toiling masses,” said Deejay.

The ceremony was replete with symbolisms. The wedding rings and coins were covered by a cloth used by mujahidin Moro fighters. The veil used is made of t’nalak, a special type of cloth woven by T’boli women and the cord that tied the couple was made of the abaca hemp. 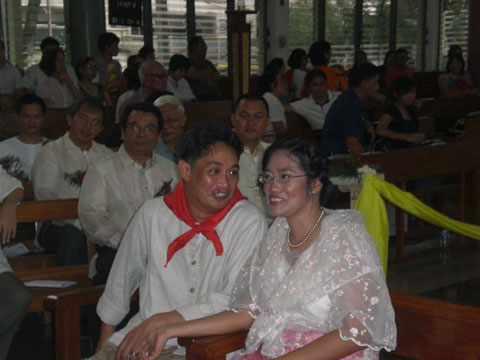 Most of the ninongs and ninangs are progressive individuals that the two admire. They include National Artist for Literature Bienvenido Lumbera, Bayan Muna Rep. Neri Javier Colmenares, Bibeth Orteza, Hustisya’s Evangeline Hernandez, Karen Empeno’s parents Concepcion and Oscar, Arkibongbayan’s Ramon Ramirez, among others.

Neil’s friends at the Asian Institute for Liturgy and Music provided most of the music at the Church. Roselle Pineda sang “Awit ni Canuplin” during the Eucharist and Deejay said those who knew the song were teary-eyed.

“Our wedding is a consolidation of our families, relatives, friends and comrades,” said Deejay. “We wanted everything to be easy,” she added, saying that the dress code for guests was casual.

The souvenirs were key chains and pendants made by political prisoners.

People’s Chorale offered songs for the couple. The couple danced to the tune of “Moon River.”

Deejay and Neil said they were deeply touched by the support of fellow activists. The food served at the reception were contributed by different people. “It was like a feast,” said Deejay.

Ilang and King are equally grateful. “Without the help of our families and friends, this would not have been possible,” Ilang said. “We are very happy.”

As Deejay put it: “We wanted our wedding to be simple but it became extraordinary because of the overwhelming support of comrades.”