“The DOJ panel totally ignored the testimony of the witnesses that attest to the culpability of the military on the death of the Kananga 3”, said Dr. Giovanni Tapang, chairperson of AGHAM and convenor of the Justice for Leonard Co Movement.

MANILA — Indignation and outrage abounded after the Department of Justice (DoJ) announced the findings of its fact-finding panel on the brutal killing of botanist Prof. Leonard Co, forest guard Sofronio Cortez and farmer Julius Borromeo last November 15 in Kananga, Leyte. The panel concluded that there was an exchange of gunfire between the military and members of the New People’s Army (NPA) and that it was the latter who killed the three.

The scientist group AGHAM-Advocates of Science and Technology for the People said the findings of the DOJ panel was a “whitewash”.

“The DOJ panel totally ignored the testimony of the witnesses that attest to the culpability of the military on the death of the Kananga 3”, said Dr. Giovanni Tapang, chairperson of AGHAM and convenor of the Justice for Leonard Co Movement. 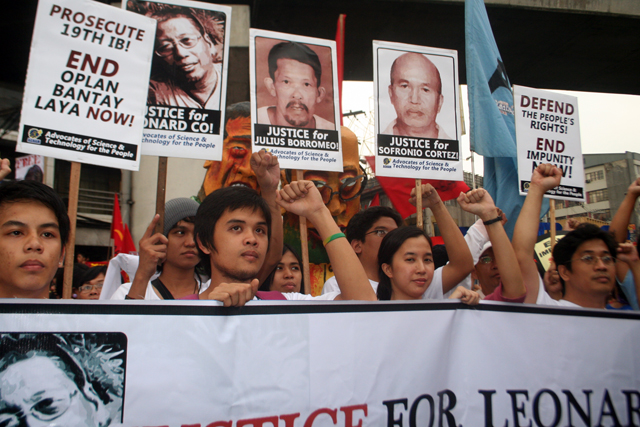 The Justice for Leonard Co Movement is calling on DOJ to review the results and to reverse the findings of the investigating panel. (File photo by Ronalyn V. Olea / bulatlat.com)

Tapang expressed exasperation over the findings, “Why did the DoJ turn a blind eye to the physical evidence that the trees in the killing site show?” AGHAM has also held a fact-finding mission in Kananga, Leyte last November 26, 2010, and its own findings revealed that there were no indications of any crossfire in the area. The bullet marks on the trees indicate that shots were fired only from the direction of the military toward where Co and his team were standing.

AGHAM further pointed out that even if Leonard Co’s employer the Energy Development Corporation (EDC) could be held liable, as the DOJ panel report recommended, it was still the soldiers from the 19th Infantry Battalion who fired the fatal shots. Leonard and his team were working near the confines of the heavily guarded EDC complex.

Tapang said DOJ Sec. Leila de Lima should review the findings of the DOJ panel. The report, Tapang said, should reveal the obvious: the military’s culpability in the deaths of the Kananga 3.

“If not, this whitewash does not bode well. The impunity that is happening now is no different from that under the previous administration,” he said.

Earlier last week, Co’s family and their lawyer pleaded with Pres. Benigno Aquino III to order the military to produce the necessary documents needed in the investigations being conducted by various agencies such as the Commission on Human Rights (CHR), the National Bureau of Investigation (NBI) and the DOJ. This is necessary, said Co’s family, to determine the appropriate charges that could be filed against members of the military and officials of the EDC, who were involved in the shooting incident. Evalyn Ursua, the Co family’s lawyer, pointed out that as Commander in Chief of the AFP, Aquino can and should order the military to produce the documents.

Tapang pointed out that despite national and international condemnation of the shooting, Aquino has remained stock silent on the issue. “It is interesting to contrast this seeming foot-dragging with the quick responses of the President to different tragedies that have happened since. Aside from losing one of the few ethno-botanists in the Philippines and two innocent law-abiding citizens, the circumstances of their death make it more urgent for Aquino and the government to act on the matter,” he said.

Bagong Alyansang Makabayan secretary-general Renato Reyes, in the meantime, asked if the DOJ was clearing the AFP in Co’s killing as a preemptive move. The AFP is set to face a CHR probe in Leyte this coming weekend. “It appears that the DOJ-NBI panel took at face value everything the AFP said, then invoked ‘national security’ in withholding information,” he said.