MANILA — Just because you cannot define something does not mean it doesn’t exist.

This is how Oscar Atadero, regional director of the International Association of Pride Organizers (Inter-Pride), explains how difficult it has been for lesbians, gays, bisexuals and transgenders (LGBTs) to defend their legal rights against discrimination because, up to the present, discrimination against members of the so-called “third sex” has no legal definition. 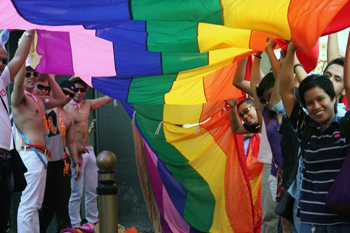 Atadero shakes his head over what he insists is a misconception that LGBTs in the country no longer face discrimination and are already accepted. “There is no genuine acceptance, only tolerance. There is still discrimination against LGBTs, but it’s insidious. It’s quite easy to deny when someone is discriminating against LGBTs with a thought, with a word, with an act: those who are homophobic can dismiss their homophobic comments or acts by saying it’s all a joke, or that the victim was merely being overly sensitive. LGBTs primarily face discrimination because of their sexual orientation and gender identity (SOGI), and the tragedy is, victims do not have an enabling environment to press complaints,” he said.

The gay rights advocate says that while there’s a whole slew of enabling laws, mechanisms and institutions that help protect women rights, LGBT rights are covered only by general laws. “This is not enough, because like I said, the discrimination we face is specifically directed against our Sogi, but local laws do not give us means to fight it,” he said. 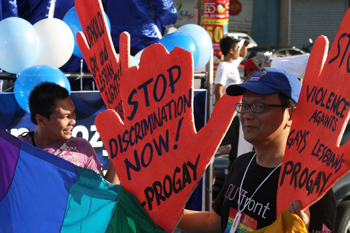 LGBTs primarily face discrimination because of their sexual orientation and gender identity (SOGI), and the tragedy is, victims do not have an enabling environment to press complaints, according to Atadero (right) of Inter-Pride. (Photo by Raymund B. Villanueva / bulatlat.com)

According to Atadero, there are so many forms of discrimination against LGBTs that are not defined much less penalized under the law.

“They are in the gray areas. Say for instance, teenage gays and lesbians, they want to cross-dress in school. They feel uncomfortable wearing uniforms, but they are not allowed to cross-dress because it’s against school policy, no explanations asked. Those who attempt to cross-dress – the gays who wear blouses or the lesbians who wear pants – end up in the guidance office and risk being humiliated and expelled. Young LGBTs have to suppress their Sogi to survive in school and in general society; and everyone knows how important these early years are to young adults — it’s when they are discovering themselves, but already they face barriers, unsubtly told that what they are doing, what they are is wrong,” he said.

As for adult LGBTs, the realities of discrimination are harsher.

“There are LGBTs who find it difficult to find employment because of unwritten but all the same enforced hiring policies of companies. This is particularly true in the manufacturing sector. LGBTs are not hired because heads of human resource departments think LGBTs are physically weaker, or mentally flighty,” Atadero said.

He said he once came across a case of a gay man who was interviewed for a job. But in the middle of the interview, the HR manager told him that they had already found someone for the job. “It was all he could do to stop himself from retorting, “Why did you have to make me go through the interview if you already hired somebody else!”

Atadero added that there have also been cases where lesbians were hired for masculine jobs, but were paid “women’s wages.” Women workers are paid lower wages compared to their male counterparts in the manufacturing sector.

“On the whole, LGBTs go through their lives defending themselves. It’s a necessary mechanism, being always on the defensive. We are subjected to insulting, judgmental remarks even when we are getting access to health care: imagine being told by nurses or doctors that we become ill as a result of our promiscuity! It’s like all LGBTs are alike, and we can be fit in one box. When we file complaints, most of the time they’re dismissed or not taken seriously,” he said.

The Need for a Legal definition

This lack of empowering legal measures for LGBTs is what prompted Bayan Muna lawmaker Teddy A. Casiño to file HB 1483 seeking to define Sogi and what constitutes discrimination against LGBTs. His proposed measure also provides for penalties against those guilty of discriminatory acts.