MANILA — A peace advocacy group in Mindanao expressed hopes that the resumption of peace talks between the government and the National Democratic Front of the Philippines (NDFP) will address the roots of economic injustices in the south.

The Initiatives for Peace (InPeace) in Mindanao, an interfaith grassroots group, welcomed the resumption of peace negotiations between the Government of the Philippines (GPH) and NDFP set on February 15 to 21 in Oslo, Norway.

The group initiated the Mindanao Leaders’ Peace Conference in Cagayan de Oro from January 23 to 25.

InPeace chairman Bishop Felixberto Calang said the resumption of the talks is a welcome venue to address issues of Mindanao that are at the core of the conflict, such as landlessness and exploitation of resources by multinational-operated mining and plantations. Next in the agenda of the formal talks is the drafting of an agreement on socio-economic reforms.

“We are looking forward to a settlement on social and economic reforms by the inking of the draft Comprehensive Agreement on Socio-Economic Reforms. In Mindanao where majority of the poor are peasants, and where national minorities such as the Bangsamoro and Lumads are part of its cultural and social milieu, the talks are a most welcome venue to address issues close to our hearts and communities, namely, genuine agrarian reform and the right to self-determination,” said Calang in a statement. 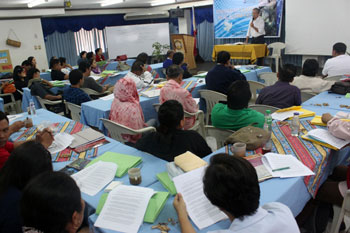 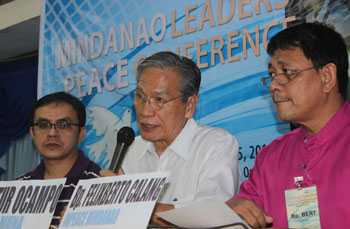 “This is the most substantive agenda of the talks, so we must do our part as stakeholders to peace, and push the agenda of social justice,” Calang added.

The bishop also urged the various sectors of Mindanao to do their part in the talks by voicing the people’s agenda in forums and in consultations to be initiated by the panels. He said that InPeace will launch peace forums as its mandate to reach out to the grassroots to put out their agenda on the talks.

InPeace also urged both panels to look into the issue of human-rights violations and the US military’s presence and intervention in Mindanao. —Ronalyn V. Olea