During the first public hearings into the deaths of Leonard Co and company conducted by the Commission on Human Rights, soldiers admitted that fired their weapons at the direction of the three victims but at the same time denied having killed them.

MANILA — The Philippine military was hard pressed this week to explain the inconsistencies in the testimony and statements of soldiers regarding the supposed encounter with communist guerrillas on Nov. 15 in Kananga, Leyte, where noted botanist Leonard Co and two other companies were killed.

During the first public hearings into the deaths of Co and company conducted by the Commission on Human Rights (CHR) in Tacloban on Jan. 26 and 27, soldiers admitted that they fired their weapons at the direction of the three victims but at the same time denied having killed them.

Co, a renowned botanist and his companions, Julius Borromeo and Sofronio Cortez, were shot dead while conducting research inside the Energy Development Corporation (EDC) complex in Kananga, Leyte, on Nov. 15, 2010. 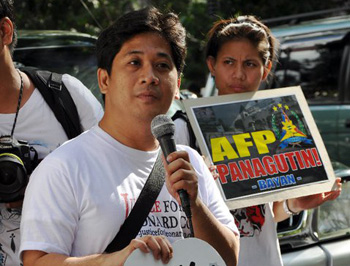 Agham’s Dr. Giovanni Tapang, together with Renato Reyes Jr. of Bayan, witnessed the inconsistencies in the testimony of soldiers regarding the supposed encounter with the NPA and the circumstances behind the killing of the Kananga 3. (Photo courtesy of Philippine Native Plants Conservation Society, Inc. / bulatlat.com)

Based on information made public by Renato Reyes, secretary-general of Bayan, and Giovanni Tapang of Agham, who were at the public hearings held at the Leyte Park Hotel in Tacloban City, 11 soldiers belonging to the 19th Infantry Battalion came to testify. Lt. Col. Federico Tutaan said they only knew of the presence of the civilians at the EDC complex at around 10:30 a.m., 30 minutes before the three victims were killed.

All the soldiers were consistent in saying that they saw “three men in black who seemed to be observing something.” 1st Lt. Ronald Odchimar, the platoon leader, said he saw three to 10 armed men in the area.

The soldiers positioned themselves about 50 meters away from a ridge. They all claimed that the alleged New People’s Army (NPA) guerrillas were the ones who fired first. Tutaan said prior to the alleged encounter, they received information that NPAs were in the area.

The soldiers also said that they had been observing the enemies for 30 minutes.

In his blog, Reyes wrote: “The AFP unit was able to observe the “men in black” for some 25-30 minutes while atop a ridge. This means the AFP had the higher ground, the element of surprise and therefore the tactical advantage. Yet the alleged NPAs were able to fire the first shot.”

The firing lasted for about 10 minutes, soldiers said. Afterward, they said they saw two dead men and one wounded, referring to Co and his team.

Morres admitted he fired his weapon and used 20 rounds at the alleged NPAs. He said he did not hear anyone shouting while the soldiers were firing.

Commissioners asked the soldiers why no single NPA guerrilla was killed or wounded after 200 rounds of ammunitions were fired. The soldiers could not answer the question but admitted that they did not find any fallen enemy nor did they pursue any of them if indeed they were there.

This prompted Co Lian Seng, Co’s father to ask: “Where was the NPA that was supposed to be there?” He said he wanted to know how his son was killed.

At the hearing, police senior inspector Randy Dagatan admitted that the area had already been contaminated when they held their investigation. Dagatan said they came to the place 24 hours after the incident because the soldiers had conducted a “clearing operations” in the area. Dagatan said soldiers were already in the place when the police arrived. At least 200 empty shells were found on the scene.

While Tutaan admitted that there were 38 soldiers present during the operation, only nine firearms were submitted for ballistic examination.

Empty shells that came from the rifles of Cpl. Marlon Morres and Pfc. Michael Babon matched with the ballistic report. The two admitted that they returned to the scene after the incident, supposedly to establish where the soldiers were positioned during the shooting.

Forensic expert Dr. Raquel Fortun also came to the hearing to testify. Fortun, together with other doctors from the University of the Philippines, conducted an autopsy on the bodies of the victims.

Fortun said Co was shot in the back and that the shooter had been nearby. “The tree buttresses initially protected Co but not when he was shot at the back on the ground,” Fortun said.

Fortun said Cortez had the most number of gunshot wounds. “Severe fractures at the lower back probably sustained with Cortez still standing,” she said.

Fortun also testified that based on the physical evidence, “gunshot was not just from the ridge. Morres/Babon were walking toward Co et al while firing,” she said.

There were also inconsistencies in the statements of the military regarding the alleged NPA sightings.

The military cited an intelligence report three days before of NPA sightings in Carigara and the vicinity of the EDC complex in Kananga. Tutaan described the complex as a “playground of the NPA.”

He said they went to Cariraga to respond to the intelligence report. However, the distance between Kananga and Carigara is almost 18 kilometers. If they were headed to Cariraga, which is northeast of Leyte, what were they doing in Kananga in the southwest? Reyes asked.

Tutaan said there were reported sightings of 30 NPA inside the EDC complex. However, Commissioner Victoria Cardona pointed out that according to the statement of Tutaan last Nov. 17, the sighting of 30 communists was in Tinaguban.

Tutaan defended himself by saying the map they submitted was wrong. Cardona asked: “Maybe what 30 communists-terrorists meant is that it is within the reservation but not EDC complex?” Tutaan responded by saying there was a mistake on labels. “EDC complex is not EDC geothermal reservation,” he said.

The soldiers also admitted having no knowledge of the supposed memorandum of agreement between the EDC and the AFP. Odchimar and Morres both said that they were not aware of the MOA.

Odchimar added he was also not aware of security protocols with EDC as well as projects in areas where the company was operating. Morres, on the other hand, said he did not know that EDC had its own security, did not know what EDC does and even what the acronyms stands for.