Way before Tuesday’s demolition of the houses owned by informal settlers in Corazon de Jesus, a poor community in San Juan City, the former mayor and now congressman, JV Ejercito, had declared that the US White House was the inspiration for the new city hall that he would like to build in his city.

MANILA — It doesn’t even look remotely like the White House but the inspiration apparently was so strong and the desire to build it so overwhelming that the Ejercitos of San Juan wouldn’t mind violently dislocating thousands of residents from their homes.

Way before Tuesday’s demolition of the houses owned by informal settlers in Corazon de Jesus, a poor community in San Juan City, the former mayor and now congressman, JV Ejercito, had declared that the US White House was the inspiration for the new city hall that he would like to build in his city.

Ejercito envisioned the new city hall when he was mayor of the city his father, the former president Joseph Estrada, had ruled for decades.  Now that Estrada’s mistress and Ejercito’s mother, Guia Gomez, is the mayor of San Juan, the compulsion to build it has evidently not died down. 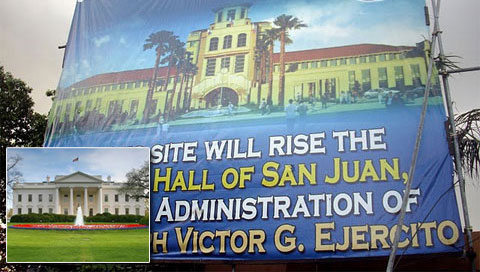 The “White House” the Ejercitos are building in San Juan; the real White House (inset) (San Juan photo from www.skyscrapercity.com)

The new “government center,” as San Juan officials call it, is reportedly worth more than P500 million, to be financed through a bank loan.

The site for Ejercito’s White House, however, was occupied by poor residents who have lived in the area almost their entire life. Arnold Repique, president of the Samahan ng Maralitang Nagkakaisa sa Corazon de Jesus (Samana), said the entire urban poor community used to cover about eight hectares. But due to “pocket demolitions” for the construction of police stations, fire station, the city’s post office, among others, it has now been reduced to its present size of a little over a hectare. (Watch full interview with Repique here.)

Ejercito had earlier declared that apart from the city hall, the government center will also have housing facilities, to be built by Phinma, that the residents would rent from 2,000 to 3,000 a month.

But residents like Marva Garcia, 34, who has been living in Corazon de Jesus for 32 years now, does not buy Ejercito’s arguments. She cannot accept, she said, that the Ejercitos would order the demolition of their homes after all the support they had given them in past elections. Estrada and the Ejercitos have prevailed in elections on the back of their promise to be pro-poor.

“It is not good to take away our homes and offer us nothing but financial assistance worth P5,000,” or about $113, Garcia told Bulatlat.com in Filipino. She said the amount is not even enough to pay for a house rent.

While those whose homes had earlier been demolished were brought to a relocation site in Taytay, Rizal, some returned to Corazon de Jesus complaining that life there at their new home was difficult. “If a truck passes by, it feels like there’s an earthquake. The schools are far from the houses. There is no water and electric supply,” Garcia said.

Residents complain that the relocation site added to their burden since, according to Repique, most residents of Corazon de Jesus earn from low-income jobs such as jeepney drivers and washing other peoples’ clothes.

And so, on January 25, Garcia and the other residents, desperate to keep their homes, formed a barricade to defend their community and fought back. “We are not animals that they can just throw away,” she said.

The night before that fateful day, the residents had set up their barricades in preparation for the demolition team that were expected to destroy 103 homes. In a statement, the San Juan City local government said that about 33 families have voluntarily agreed to move to relocation sites on January 24. The majority, however, chose to stay and fight for their rights.

The residents set up two “protest centers” blocking the two entrances to their community, one facing St. John the Baptist Church and another located beside the Pinaglabanan Shrine, the site of the first skirmish that signaled the beginning of the 1896 revolution against Spain. (Pinaglabanan means, literally, where a fight had occurred.)

Between 6 and 6:30 a.m. of the 24th, residents noticed members of the police roving near their protest centers. The sniper photographed by Tudla Production was positioned on top of one of new city hall being built in the government center beside the urban-poor community.

Tension ran high every time the police tried to go nearer the barricades but the atmosphere remained relatively peaceful. At around 8:30 a.m., the police warned the residents they had only an hour to abandon their barricades. “Show us a court order first!” residents shouted back.