In Philippine Hospitals, a Scam Preys on New Nurses

Many hospitals are charging new nurses fees in exchange for work, training and experience, which are required for nursing jobs abroad. This offshoot of the government’s exploitative labor-export policy needs to stop, according to the Gabriela Women’s Party.

MANILA — Kit, 26, is a licensed nurse but currently unemployed.  To her, the recent hearings at the House of Representatives about hospitals collecting fees from new nurses in exchange for letting them earn their first work experience in their hospital only confirmed that what she went through five years ago is still a reality today.

In 2005, Kit had to pay a private hospital in Manila so she could work there as a full-time nurse for two months. A newly licensed nurse at the time, she had to get a record or “experience” of having worked at a hospital before she could be considered for long-term employment in other hospitals here or abroad. She paid P2,000, or about $45, in 2005 for two months of full-time work at the hospital.

“You cannot say no to this ‘regulation’,” Kit, who asked that her real name not be used, told Bulatlat.com. If you refused, you will never get your first record of “training” or experience, she said. Besides, while they were working in the hospital under this arrangement, their hope was to get absorbed later by the same hospital. Others regard the work experience to be earned as supporting material for job applications abroad.

With a sister-in-law still in nursing school today, Kit said that even without the congressional hearings she knows that the practice of charging nurses in return for a chance to work for the first time in a hospital is still prevalent. Only a few hospitals do not charge their nurses with such fees, she said, citing for example the East Avenue Medical Center. “But you can ‘work’ there for only a month”. In Fairview General Hospital, “you can work as nurse without paying the hospital for up to five months.”

Recently, the long-standing issue of Filipino nurses was tackled in the House of Representatives, prompting some hospital executives to dare nurses to name the hospitals involved. Unfortunately, few young nurses readily came out although some have spoken on condition of anonymity.

With 280,000 nurses unemployed today, based on a “conservative estimate” of Leah Samaco-Paquiz of Ang Nars, younger nurses may be fearful of speaking out against their prospective employers. 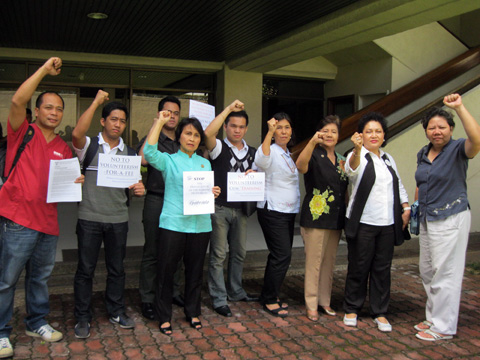 Still, senior nurses backed by their professional organizations —  such as the NARS ng Bayan president Eleanor Nolasco, Ang NARS president Leah Paquiz and Alliance of Young Nurse Leaders and Advocates President Alvin Dakis —  joined the progressive party-list representatives in Congress last week in filing a resolution calling for an end to this practice.

Resolution Vs. Exploitation of Nurses

Led by Gabriela Women’s Party Representatives Emmi de Jesus and Luzviminda Ilagan, they urged in a resolution President Benigno S. Aquino III “to immediately halt the exploitative practice of collecting training fees from professional and registered nurses under various forms of ‘volunteer training programs’ by public and private hospitals, pending investigations in aid of legislation by the House Committee on Civil Service and Professional Regulations.”

The filing of the House Resolution followed days of hearings, often heated, where it was disclosed that new nurses today are routinely being required to pay from P3,000 to P8,000 for three to five months of “volunteer service” as registered nurses in hospital wards. During the volunteer service, the nurses reportedly perform regular duties of regular nurses.

Hospitals earn additional income from this scheme, said Gabriela Women’s Party Rep. Emmi de Jesus. “The hospitals further benefit because they are able to fill the needed nursing staff at a lesser cost or for free. This is unpaid labor in the guise of volunteerism.”

De Jesus described the scheme as “blatant exploitation of our professional nurses,” a tragedy that repeats itself year after year with every abundant supply of newly graduating nurses. According to de Jesus, nurses are expected “to grab the slightest opportunity to gain clinical experience” so they could apply for work abroad.

In fact, the mushrooming of nursing schools in the country has been regarded as a direct result of the trend that nurses are one of the country’s top labor exports.  From 2005 to 2008, even doctors took trainings to become nurses and left the country for nursing jobs abroad.

Given the importance of work experience as nurse in applying for jobs abroad, Philippine hospitals reportedly promise to give nurse volunteers a certificate equivalent to a working experience. But this certificate is not useful in all countries. Some “have their own nursing standard tests like the CGFNS which the nurses are required to take and pass,” said Gabriela Women’s Party Rep. Luzviminda Ilagan.

In the hearings in Congress, more experienced nurses revealed that some hospitals even refer to the nurses paying the hospitals to gain experience as “nurse trainee.”  This in effect “justifies the cost of training,” de Jesus said. She said training in a hospital ward by assuming the role of basic staff nurse “is not equivalent training for specialization.” Real specialty training in nursing centers on advanced training in specific areas such as critical nursing and oncology.

The progressive legislators traced the interlocking roots of this “blatant exploitation” of nurses to the country’s labor export policy and to the yearly cutbacks in the budget allocation for public health.

“On the one hand, the nurses have been commodified and ‘packaged’ into ‘key labor force elements’ of the government’s regressive labor export policy. On the other hand, insufficient allocation of resources for the government’s health sector limits its capacity to absorb and hire nurses for service to rural areas, where they are most needed”, de Jesus explained.

The Alliance of Health Workers has long been urging the government to implement laws that encourage health workers and professionals to stay in the country, for instance the Magna Carta on Health Workers and the Philippine Nursing Act. Nursing organizations have also been voicing the need to increase the government plantilla position for nurses. It has remained pegged at ‘80s level, but the Philippine population has increased by millions since then.

The result is a gaping lack of nurses when there are nearly 300,000 trained but unemployed nurses in the country. While the World Health Organization recommends an ideal nursing professional to patient ratio of 1:4, the reported actual current ratio is one nurse for every 16,000 Filipinos.

In fact the ratio maybe even worse in farflung areas or in public hospitals, because research showed that the bulk of the country’s hospitals, clinics and professionals are in the private sector servicing only 20 to 30 percent of Filipinos who can afford it.

Gabriela’s Ilagan urged Aquino to show his political will and push for the elimination of all forms of exploitation against Filipino nurses. She urged the president to increase the health budget as well and “ensure employment of these registered nurses so he can deliver the much needed health care for all Filipinos. “

As for Kit, she said she later got a job as full-time nurse in another private hospital. It paid her, too. But after an unfortunate experience when she was accidently pierced by a needle used on an OFW, who happened to be a likely HIV patient, she learned about the lack of insurance and hazard pay for nurses like her. She was working at the operating room and it was an accident, but she said she was blamed for it and left to deal with it alone. So she resigned.

“I can take the relatively low pay and the long hours, but this, too? I have a family who needs me,” she said.