You Are Here: Home → 2011 → February → 6 → New Way to Measure Poverty Denounced as Deceptive, Can Undermine Calls for Better Wages

MANILA – A new poverty index that reconfigured the method of determining the extent of poverty in the Philippines has been criticized as deceptive and can be exploited by the government to declare that life has become better under the Aquino administration, critics said the other day.

Among the new index’s implication is that it can undermine calls for an immediate and substantial wage increase for all workers and employees,  according to Ferdinand Gaite, president of the Confederation for Unity, Recognition of Government Employees (Courage).

He said the National Statistical Coordination Board’s latest way of measuring poverty is a serious impediment toward the labor sector’s demand for better wages because the government uses the poverty index as basis for determining the cost of living and the minimum wage.

“A lower poverty line will now be used to undermine the minimum wage. This can be used as a counter-argument to calls for across-the-board wage and salary hikes,” Gaite said.

The  NSCB is set to  announce next week the changes to the  the 2009 Official Poverty Statistics. The NSCB has invited Cayetano W. Paderanga, Jr., director general of the National Economic and Development Authority (Neda) and officials from the National Anti-Poverty Commission (NAPC) and the Department of Social Welfare and Development (DSWD) as resource persons to help explain the basis of the new poverty index. 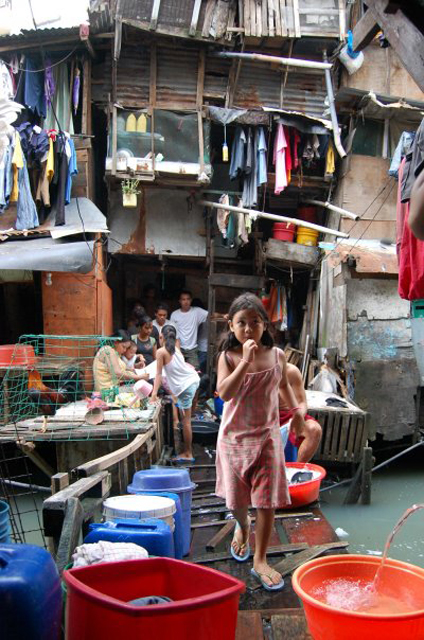 This slum community in Manila should dispel the notion that life has become better under Aquino. (Photo by Emil Mercado / bulatlat.com)

In July last year, the United Nations Development Program (UNDP) and Oxford University  launched a new index to measure poverty levels that, they said, give a “multidimensional” picture of people living in poverty. They said this new index can help target development resources more effectively.

Gaite expressed certainty that the new adjusted index will be deceptive in nature. He said the changes made regarding the computation of the poverty threshold seem to have the inherent intention to mislead people into thinking that life is indeed better under the Aquino administration.

“The new method has reduced the poverty incidence among individuals from 32.9% to 27.4 %,” Gaite pointed out. “Meanwhile, current living standards remain deplorable, with many Filipinos experiencing hunger, unemployment and poverty on a daily basis.”

Gaite said “these adjustments mean nothing to the ordinary citizen who struggles to cope with rising costs of basic commodities and services.” (Read Bulatlat.com’s full coverage on the increases in prices and transportation cost.)

According to the NSCB, the annual growth rate in 2010 of 7.3 percent was the highest GDP growth since the 8.8 percent growth recorded in 1976 – the highest in 34 years,  a claim that grassroots people’s organizations find impossible to believe.

Independent think-tank Ibon Foundation said that the government’s latest labor force survey pegs unemployment at 2.80 million in October 2010, slightly higher than the 2.72 million reported in the same period last year. The number of the unemployed could very well be pegged at 4.16 million instead, the economic research group said. The difference, it pointed out, is caused by the recently revised definition of unemployment and an estimate approximating the previous definition for comparability with previous years.

Ibon Foundation added that while the reported creation of over a million jobs from last year is welcome, the quality of over half these jobs leaves much to be desired. Out of the one million new jobs created, some 515,000 were in the economy’s lowest earning sectors: agriculture (201,000 jobs), wholesale and retail trade (251,000) and private households (62,000).

The stubbornness of high unemployment and rising underemployment despite the government’s declaration of a “scintillating”  6.5 percent economic growth in the third quarter affirms that joblessness remains a serious cause for concern.

Based on Ibon’s analysis, there is a problem if the economy is consistently able to register growth and deliver corporate profits but unable to create enough jobs and raise wages. The situation highlights the need for urgent reforms in the domestic economy and address its inability to create regular and productive jobs, the group said.

Gaite said that this latest move of the Aquino administration to alter the poverty index by bringing the poverty line lower proves its  indifference to the woeful plight of the common Filipino.

“It also shows Aquino’s complete inability to intervene and halt the unabated price hikes. The government’s systematic abandonment of its responsibility to provide accessible commodities and services for the people could very well lead to widespread discontent and protests,” he said.

Courage leaders and member organizations said they would continue calling for a P6,000 increase in the minimum pay of all government employees. They are also supporting the call for a P125 across-the-board wage increase for workers in the private sector.  #