John Monterona, regional coordinator of Migrante-Middle East, said 145 OFWs working for Al Nahar company located at Nalut, Libya, with a camp near the border of Algeria and Tunisia had been abandoned by their foreign employers. Al Nahar, Monterona said, is about 400 kilometers away from Tripoli.

Around 4:00 a.m. on February 24, Gil Lebria, Migrante coordinator in Libya, said there are 200 OFWs in Camp No. 5 in Hamada-Nalut who have been trapped. In Camp No. 4, Lebria reported that about 50 OFWs said they do not have food because their camp was ransacked by armed men who fired at the gates. “Company vehicles, five Toyota double cab pick up cars, were carjacked by the armed men then left (the OFWs) unharmed.”

Monterona said there are also 100 OFWs who have been abandoned by their employers in Kufra, southeast of Libya bordering Egypt and Sudan.

Archebuhe said other countries “already evacuated their citizens except the Philippines.”

On February 21, President Benigno S. Aquino III and the Department of Foreign Affairs (DFA) have issued travel advisories to Filipinos who have plans of going to Libya and its neighboring countries, Bahrain and Yemen “to defer non-essential and non-urgent travels, until the security situation in those countries have stabilized.”

The following day, DFA has raised its alert level, claiming that they are already arranging voluntary repatriation for Filipinos who wish to return to the country in the light of the ongoing violence in Libya. 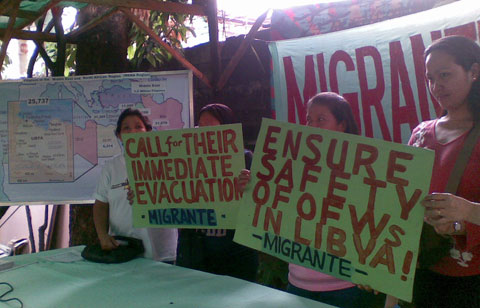 Relatives of OFWs in Libya are calling on Philippine embassy officials in Libya to facilitate the immediate repatriation of their loved ones. (Photo by Janess Ann J. Ellao / bulatlat.com)

It was only in February 24 that the six-man quick reaction team from the DFA, led by Office of the Undersecretary for Migrant Workers Affairs Executive Director Ricardo Endaya, arrived in Tripoli “to augment the personnel complement of the Embassy and assist the Filipinos who are availing of the voluntary repatriation program implemented by the Embassy and the DFA.”

The DFA claimed that they have arranged safe relocation sites in Tripoli, Benghazi and Al Baida for Filipinos. Repatriates from Tripoli would proceed to Tunis in Tunisia, while those who would be coming from Benghazi and Al Baida could go to Alexandria in Egypt, where they could catch their flights back to Manila. They said they have already requested for the assistance of the International Organization for Migration in “arranging commercial flights and ensuring that OFWs are included in any IOM-sponsored evacuation of migrant workers from Libya.” The Philippine government has released an initial amount of $150,000, $581,000, and $2.326 million from the DFA, the Department of Labor and Employment and the Overseas Workers Welfare Administration, respectively.

The problem, however, Migrante International noted, is how the OFWs could travel safely to this destinations, which were announced by the DFA, now that the situation has gotten worse. Without any means of transportation, Migrante chairman Garry Martinez said, the only option left for OFWs is to walk. “But is there an assurance that they would not be shot by the protesters or by state security forces?”

Martinez added that based on how things are going, the team that Aquino sent should now be dubbed as a “slow” reaction team.

“This is one of our fears. The situation has become this bad because the government is seemingly undecided on what to do. It seems that they are still considering the remittances that they would lose rather than the lives and safety of our fellow Filipinos,” Martinez said.

“Are we always going to be late?” Gabriela Partylist Representative Luzviminda Ilagan said in a report, “Are we going to wait for the civil war to erupt? We cannot always act on the last minute before implementing an evacuation plan and put the lives of our OFWs in danger. What exactly is the evacuation plan mapped out by the DFA.”

“How does the Department of Foreign Affairs intend to go about the evacuation when our OFWs could barely get in touch with the embassy? Do we have emissaries in different cities locating OFWs in their known job sites?” Ilagan asked.

Martinez said the government should also prepared as other parts of the Middle East are also going through anti-government protest actions, such as in Yemen and in Bahrain. “Civil wars are also looming in and around the Saudi borders where approximately a million OFWs are situated. This is no longer just a matter of sporadic violent clashes but an impending civil strife is already in the offing in the Middle East.”

“We should be ready for a scenario where thousands of OFWs would be returning to the Philippines when there are still no jobs available in our own country,” Martinez said. “When this time comes, the government would definitely need more than just an evacuation plan.