MANILA — Contrary to the festive celebration being sponsored by the Aquino government, various cause-oriented groups marked the 25th anniversary of People Power I uprising with a protest against price increases.

Members of people’s organizations under the Bagong Alyansang Makabayan (Bayan or New Patriotic Alliance) marched along Epifanio delos Santos Avenue (Edsa) on February 24, carrying the call “Wala pa ring pagbabago sa ilalim ni Aquino!” (There has been no change under the Aquino administration.)

“Twenty-five years after the Marcos dictatorship was toppled down, the post-Edsa I regimes all failed to deliver on the promise of change,” said Renato Reyes Jr., Bayan secretary-general. “Twenty-five years after Edsa I, and 10 years after Edsa II, the Filipino people continue to face problems of poverty, landlessness, unemployment, human rights abuses, corruption and unequal foreign relations. There is no real change, instead there are many failed promises under the ‘daang matuwid’ (righteous path) of Benigno Aquino III.”

The protesters marched from Cubao to the office of the Department of Transportation and Communication (DOTC) in Ortigas then proceeded to the People Power Monument and to the general headquarters of the Armed Forces of the Philippines in Santolan. 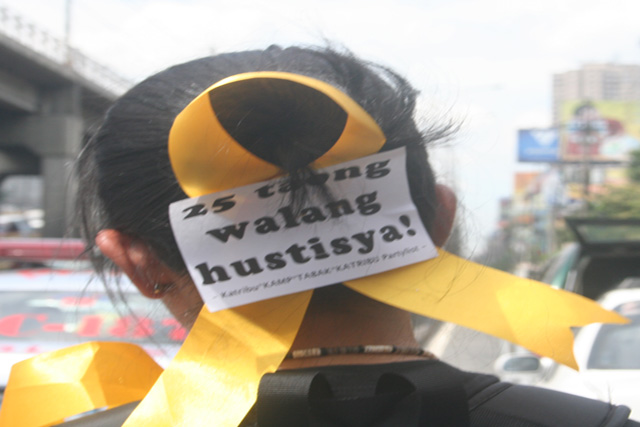 Bayan said that all post-Edsa I regimes failed to deliver on the promise of change. (Photo by Anne Marxze D. Umil / bulatlat.com)

At the DOTC, the Light Rail Transit Authority (LRTA) was holding a meeting regarding the MRT-LRT fare increase. “The timing of the LRT’s board meeting that seeks to approve the LRT fare hike is a clear example of how the current government remains insensitive to the plight of the people,” Reyes said. 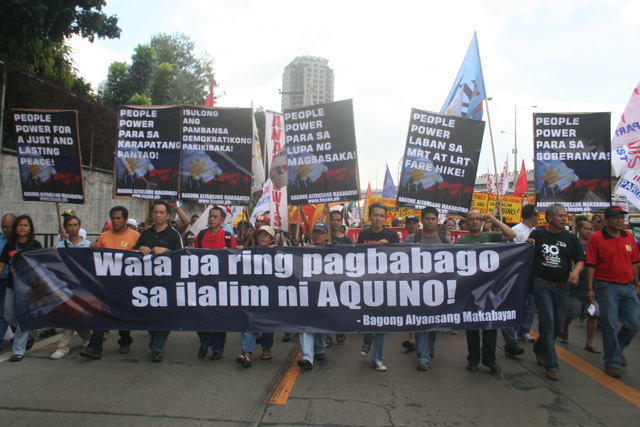 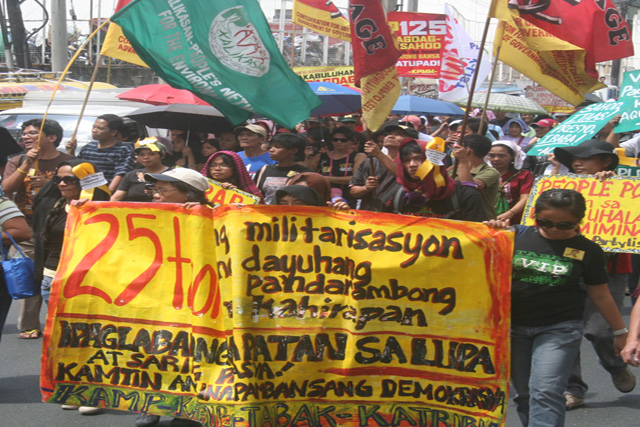 According to KPMM, the bulk of commuters using the train systems, who would be most affected by the fare hike, are low-wage earners, students and other vulnerable groups. A study by the Mega Manila Public Transport showed that 68.1 percent of weekday MRT-LRT commuters are low-wage earners whose income falls below $229 and a significant 15.3 percent are jobless.

“Because the people’s plight does not bother President Aquino, as he pursues the implementation of the MRT-LRT fare hike to favor the drive for profit of big private investors, the people are left with no other choice but to assert our legitimate calls with greater militancy,” Gaite added. 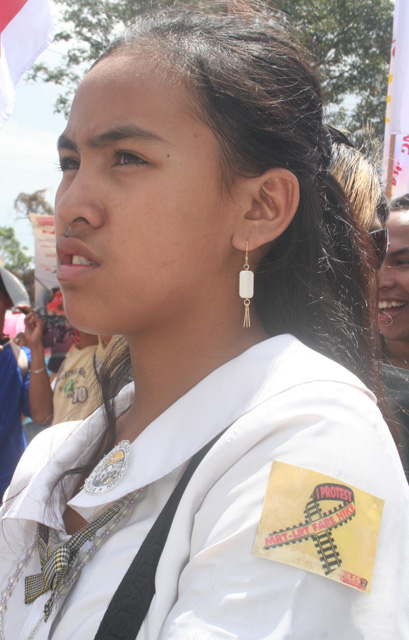 The youth slammed the lavish celebrations amid non-stop increases in the prices of basic commodities, transportation fares and tuition fees that burden Filipinos. (Photo by Anne Marxze D. Umil / bulatlat.com)

Former Anakpawis representative Joel Maglunsod pointed out that different sectors have given their demands to the new government but these demands remained unheard by Aquino. He said that since Aquino took power he has not mentioned anything that would address the welfare of the people. “His answer to poverty is Public-Private Partnerships, which is only meant to serve the interests of foreign investors,” Maglunsod said.

“Up to now, our call for a genuine land reform, land distribution of Hacienda Luisita, a wage increase and social justice remain a dream,” Maglunsod added.

Meanwhile, Kabataan secretary-general Vencer Crisostomo, said that as long as the country’s president is a “puppet to the interests of landlords, big businessmen and imperialist countries there will be no change.”

Crisostomo also criticized the lavish celebration of the People Power I anniversary. “It is difficult to have a party to celebrate Edsa I while there are people who have empty stomachs because of the non-stop increases in the prices of basic commodities, transportation fares and tuition fees. Clearly, this government does not serve for the interest of the majority of the people,” Crisostomo said.

“The lessons of Edsa have shown to us that changing the president is not enough if we want to achieve genuine change. Edsa did teach us the value of collective action. The people must now exercise this power in the struggle for genuine freedom and democracy,” Reyes said.