Migrante International criticized the Aquino administration’s crisis management — from the repatriation of OFWs to simply responding to the calls via their hotline numbers — as slow and inept. The group challenged the government to provide more than just livelihood assistance in dealing with jobless OFWs who would be flocking the country in the coming days.

MANILA — Despite the Philippine government’s last ditch efforts to repatriate more than 25,000 Filipinos in Libya in the soonest possible time, migrants’ rights group Migrante International and overseas Filipino workers (OFWs) are dismayed and disappointed over the ineptness of the present administration in addressing and responding to the critical situation.

“The government’s crisis management, from the repatriation of OFWs to simply responding to the calls via their hotline numbers, is slow and inept,” Migrante International secretary-general Gina Esguerra told Bulatlat.com during a recent protest action at Plaza Miranda in Quiapo, Manila.

Since the violent protest actions erupted in Libya, the office of the Department of Foreign Affairs (DFA) Undersecretary for Migrant Workers Affairs reported that, as of March 1, there are 2,324 Filipinos who were brought out of Libya and 473 who were repatriated to Manila. This number, unfortunately, is less than half of the 25,737 Filipinos working in Libya, as reported by the DFA to the House of Representatives in June 2010.

But President Benigno S. Aquino III was quick to defend his administration, saying in a report: “There has been criticism that we have not been handling or attending to them. That is not correct,” President Aquino said, adding that there are “severe limitations” on what the government can do. 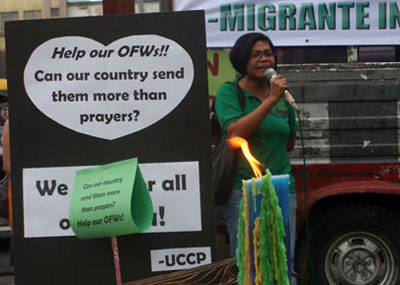 Gina Esguerra, Migrante International secretary-general, during a protest action urging the government to respond to the worsening situation of OFWs in Libya. (Photo by Janess Ann J. Ellao / bulatlat.com)

President Aquino said the embassy staff in Libya were “overwhelmed” and that the government has sent six members of the DFA and five personnel from the Department of Labor and Employment (DOLE) to provide them assistance. President Aquino added that each flight from Libya can accommodate only 200 to 300 passengers and leasing an airplane costs $302,000 per flight.

The DFA, for its part, has credited acting-secretary Albert Del Rosario visit to Tripoli, Libya for facilitating the gathering of Filipinos waiting for repatriation. He “quickly organized a convoy of 40 vans and buses to bring some 400 OFWs to the Tunisian border and safety before nightfall.” Del Rosario left for Libya on February 26 to “personally oversee the repatriation operations to evacuate Filipino nationals.” He returned to Manila afternoon of March 1.

In a DFA statement, Del Rosario was quoted in one of his phone calls from Libya, saying: “We’re on top of the situation in Libya. We (are) fully deployed and we have a strategy.”

However, Gil Lebria, Migrante International’s coordinator in Libya, and who himself was starnded in the strife-torn country, has posted in his Facebook account a photograph showing him and other OFWs holding a placard bearing the words: “Mga salot sa OFW, P-Noy, DFA, DOLE, OWWA, Philippine Embassy and POEA.” Lebria has recently boarded a government-chartered ship from Benghazi, Libya to Djerba, Tunisia, and is awaiting exit to Malta where they could catch their flight to Manila.

Lebria said embassy officials are “missing in action in Tunisia,” one of the exit posts identified by the DFA. He added, through a Facebook message to Bulatlat.com, that it is their company, not the government, that shouldered their air fare expenses to Manila.

“While foreigners from other countries have been or are being helped to evacuate, the Filipinos were initially instructed to stay where they are safe,” the United Church of Christ in the Philippines said in a statement. “We fear that there is no place where they can be safe.”

Migrante International’s crisis hotline reported that about 109 OFWs have been waiting for more than a week near the border of Tunisia and Libya at Ghadames site, which is 350 kilometers away from the nearest border at Wazzin and some 650 kilometers away from Ras El Jdir, where the DFA is supposedly situated.

Around 150 OFWs, who are working for Daewoo Misurata Combine Cycle Project In Misurata, Libya are still trapped, holding on to a week-old promise of their employer to evacuate them. No concrete action has been done as of press time. They fear that they might become the target of looters in Amal, Libya.

With their depleting supply of food and water, OFWs deployed by Hopewell Recruitment Agency, had to walk towards the Algerian border on February 27, where they deemed that it would be relatively more safe. “All of them,” Migrante International report said, “do not have passports with them.”

Another 100 migrant workers in Wafa Site in ENI Gas Plant braved the desert route as they walked toward the Algerian border for seven hours. The 47 Filipinos and five Thailand nationals, however, were not allowed to pass through because they lack documents. When they called the Philippine Overseas Labor Office-Overseas Workers Welfare Administration (Polo-Owwa) in Libya, they were told to return to go to Ghadames site, which would take another two hours of travel by foot.