You Are Here: Home → 2011 → March → 2 → Martial Law Victims Insulted by Exclusion from List of Compensation Claimants

Out of the 9,539 original complainants in a class action suit filed against the late dictator Ferdinand E. Marcos, only 7,526 victims would receive compensation. “Are they telling us that we are not genuine victims? Where is justice for us?” said martial-law victim Carlos Bolito, 60, after learning he was not included in the list of claimants.

MANILA — Jose “Bong” Barsoles, 59, who was tortured and detained during martial law, went to the Commission on Human Rights (CHR) compound in Quezon City on March 1 to get his share of the compensation awarded by the Federal District Court of Hawaii to the victims of martial law who filed a class action suit against the late dictator Ferdinand E. Marcos.

But after patiently waiting for his turn, Barsoles was told that he is not included in the master list of claimants. Surprised, he told the person issuing the claims that he was among the original petitioners in the class suit. He was then asked to fill out a form and was told to wait for further notice.

Barsoles was among the more than 2,000 victims of martial law whose names have been delisted from the original list of petitioners. On Feb. 28, some of the victims received $1,000 each during ceremonies at Club Filipino in San Juan City. Out of the 9,539 original complainants, only 7,526 victims would receive their cheques. 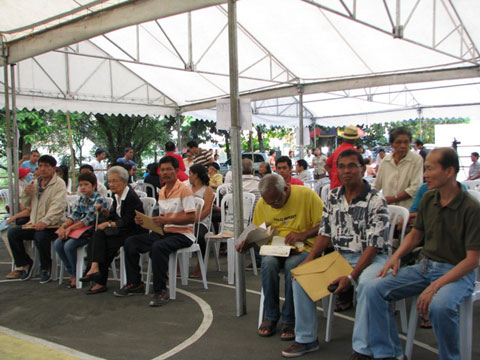 Martial-law victims and families of those slain during the Marcos dictatorship wait for their turn to get compensation. Others, including those who joined the class suit, were not in the list. (Photo by Ronalyn V. Olea / bulatlat.com)

The compensation came from the $10-million settlement agreement by Marcos crony Jose Campos, which was approved by United States District Judge Manuel Real. While the estimated value of Marcos’s ill-gotten wealth in Colorado and Texas is pegged at $78 million, the counsel for the martial-law victims Robert Swift settled for only $10 million. Twenty-five percent of the amount was given to Swift and his team of researchers and only $7.5 million were allotted for the victims.

“In general, we welcome the distribution of the compensation as it symbolizes our victory, although the victory is still incomplete,” Fr. Dionito Cabillas, secretary-general of the Samahan ng Ex-Detainees Laban sa Detensyon at Aresto (Selda) told Bulatlat.com. Cabillas said the Selda leadership is dismayed that the number of victims who are entitled to compensation has been reduced.

In 1986, Selda led the filing of a class suit against the Marcoses in Honolulu, Hawaii, where the former dictator and his family fled during the people’s uprising at Edsa. In 1995, the Federal Court of Hawaii found Marcos guilty of grave human-rights violations and awarded $2 billion in compensatory damages to the victims. There were 9,539 complainants in the class suit against the Marcoses.

In 1998, the Swiss government transferred $640 million to the Philippine government. The Philippine Supreme Court ordered its transfer to the national treasury in 2003. Under the Comprehensive Agrarian Reform Law (CARL), all sequestered assets from the Marcos family would be utilized for the implementation of land reform. The Hawaii court ruled that a portion of the amount must be allocated to the victims, but a compensation law would have to be passed by Congress. 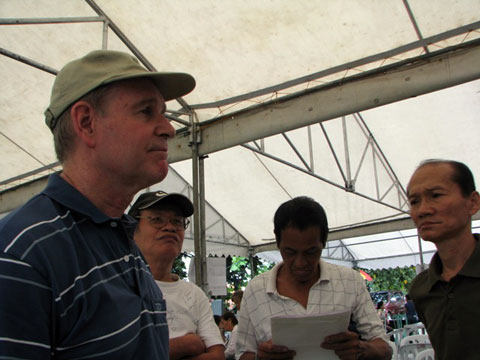 Lawyer Robert Swift tells a group of martial law victims that they are ineligible for compensation. (Photo by Ronalyn V. Olea / bulatlat.com)

Cabillas said Swift’s statement is unfair. “He was the one who submitted the names to the court. The Hawaii court already ruled that the 9,539 victims are eligible for compensation. They had submitted the requirements. Even now, they can produce documents,” Cabillas said.

Cabillas said that in October last year, Selda leadership wrote to Swift asking for a dialogue but the latter ignored their letter, according to Cabillas.

“Does he know the hardships these victims went through? Is this not saddening?” Cabillas said.