Villanueva, commander of the Army’s 7th Infantry Division, said that the military wants to use the land as a housing site for retired and active personnel. He alleged that land was properly segregated because that required an act by Congress and not just a mere executive order.

According to the AMGL, 6,000 peasants now live in the reservation, tending rice and vegetables crops, as well as planting other agricultural produce. Before the turnover in 1991, however, the area was already headquarters of the Philippine Army 7th Infantry Division.

Now, though the 3,100-hectare lands is under CARP with Agrarian Reform Communities (ARCs), and the farmers have been awarded with Certificate of Land Ownership Awards (CLOA). The AFP in has refused to give up the land and recognize much less respect the rights of the farmer-beneficiaries.

A Series of Human Rights Violations

According to FMMR officials, the effort to distribute the land to farmers has been difficult. Among the private groups, corporations and individuals who tried to declare ownership, retired military personnel and private firms with confirmed connections to the military and police also joined the fray.

The involvement of the military ad the police has left a trail of violence.

On May 30, 2001, elements from Palayan Municipal Police, Provincial Police and 309th Provincial Mobile Group (PMG) allegedly led by a hired hand of landlord Martin Tinio raided houses of farmers, stole personal items of the residents and illegally arrested some of them. The victims were members of the Agrarian Reform Beneficiaries Association or ARBA.

On August 18, 2007, retired Col. Feliciano Sabite, accompanied by armed men, reportedly harassed a group of farmers. Based on eyewitness accounts, Sabite, armed with M-14 rifle and Cal. 45 handgun, threatened the farmers, cursed at them and ordered them to vacate the land after saying that he had already bought the land. 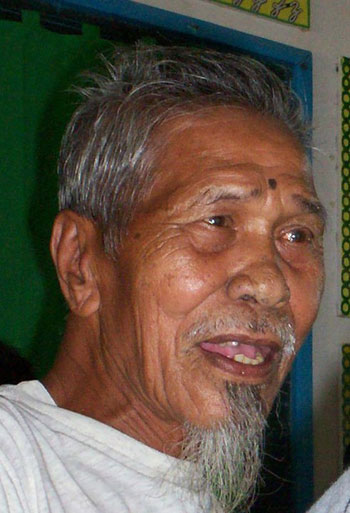 The following month, September 27, 2007, about 3pm, Col. Sabite strafed houses of farmers and stolen some of their belongings. The farmers sought the help of soldiers in the camp, but they refused to arrest Sabite.

On October 25, 2008, soldiers from the 7th IDPA demolished 34 of 36 houses owned by the farmers. This was after the house owners attended a protest caravan led by the KMP against the CARP in Manila

On July 9, 2010, 78-year old peasant leader Pascual Guevarra was shot dead by two men who entered his house in the reservation. He was the second activist to be killed since President Benigno Aquino assumed power the previous June 30.

Guevarra’s grandson, Ronnel Viloria, 18, was wounded in the shooting.

Related Story: Pascual Guevarra and the Struggle for Land

As of February 2011, the peasant groups say that the community remains militarized. Soldiers are camped in the barangay halls without the proper consent of local officials. The military presence continues to create fear and apprehension among residents, impeding their mobility.

“The CARP has not been beneficial for the farmers living in the FMMR. Their case is a strong proof of the bankruptcy of the CARP. They are legitimate farmer-beneficiaries formed in Agrarian Reform Communities (ARCs), but they continue to be threatened by land grabbers, military intrusion, and fake beneficiaries,” said AMGL chairman Joseph Canlas.

Canlas said the farmers are the legitimate, legal and moral owners of the land, but they are forced to continuously defend their rightful claim. “Though they were given CLOAs, these never guaranteed land distribution. They are only able to keep tilling the lands through their unity and struggle, through their own assertion,” he said.

Now, as more extensive military exercises are scheduled to take place in the FMMR, the farmers are faced the challenge of not only defending their land but their own lives.