According to reports, among the disagreements between the panel members was regarding the manner of presentation of witnesses – when they will be presented and who will present them. The new panel members were reportedly chosen in consultation with private prosecutor Santos and Prosecutor-General Claro Arellano. The creation of the new panel was said to be de Lima’s effort to ensure a smooth transition and a better working relationship throughout the trial.

The private prosecutors include Santos and Harry Roque, who were hired by relatives of the victims.

During the last hearing of the case, the proceedings were briefly disrupted after Myrna Reblando, the wife of one of the slain journalists Bong Reblando went hysterical outside the Quezon City Regional Trial Court where the case was being heard. Mrs. Reblando, shouted and cursed at the Ampatuan lawyers while the National Bureau of Investigation medico-legal officer, Dr. Reynaldo Romero, was presenting the autopsy results on the witness stand.

Federis said the CEGP’s support for the campaign for justice for the victims of the Maguindanao Massacre was part of their advocacy to help strengthen and improve the journalism profession in the country by training socially aware campus writers.

“The CEGP believes that journalists have an important role to play in exposing social realities, especially when it comes to the workings of the government, its agencies and its armed forces. Journalists have the weighty responsibility of reporting important events and developments that impact on the lives of the most ordinary citizen. Campus journalists would do well to carry these principles, too; even before they join the profession after college,” she said.

Pasion, however, said it is not just the mainstream press that is being targeted by various forms of repression; he said even the campus press is under attack. 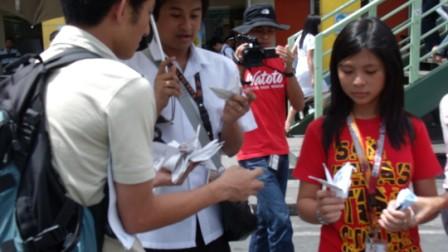 CEGP members give out paper cranes to passersby in Mendiola to remind the public that justice has not been attained for the victims of the November 23, 2009 Maguindanao Massacre (Photo by Ina Alleco R. Silverio / bulatlat.com)

Based on the latest records of the CEGP, there have been 204 campus press freedom violations in the first half of 2010 alone. Majority of these violations or 115 cases took place in Luzon with 38 recorded in the National Capital Region. There were 62 violations in the Visayas, while the rest, or 27 cases, happened in Mindanao.

This is the same case with the student writers of the “Philippine Collegian” of UP Diliman, the “Earist Technozette” of the Eugelio “Amang” Rodriguez Institute of Science and Technology-Manila, and the “UP Vista” of UP Visayas Tacloban College.

“The Spectrum” of the University of St. Lasalle has to collect the funds personally from students because the administration does not recognize the student publication. “The Beacon Newsmagazine” of the Ateneo De Zamboanga University suffered a budget slash.

“The Cordial” of Cor De Jesu College in Digos city in Mindanao was shutdown after school officials said that the editorial board failed to produce issues during the first semester of 2009. The student reports disputed the accusation, but the administration ignored them and proceeded to establish a new student publication.

Writers of the “The Guardian” of the Rizal Technological University-Mandaluyong was threatened with a libel case forcing the editorial board to hold its publication issue.

Finally, a number of campus publications in Cavite were barred by their respective school administrations to join a provincial student press congress set by the CEGP-Southern Tagalog held in Cavite State University. Suspected military agents released flyers outside the venue accusing the CEGP as an organization affiliated with the CPP –NPA.